Moradabad:  The 3rd phase of Lok Sabha General Election 2019 seen large turn out of voters at the polling stations. Polling started at right time at 7 am but report of faulty EVMs received from many places in Moradabad and voting was affected for almost half an hour. However the percentage of voter’s turn out improved from previous two rounds and it is likely that turn out of voters may even exceed to 60 percent. Upto 1 pm, voting was reported to 36% which is higher than the urban reported in the past 2 rounds of voting. 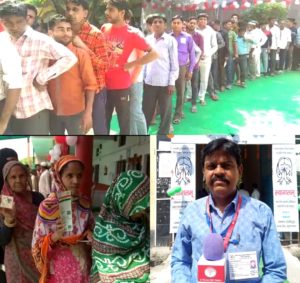 Loksabha General Election 2019 Polling Percentage in 3rd round of voting on 23 April 2019 in each segments of Moradabad  Lok Sabha  Seat increased from previous two rounds. Now almost half of the Lok Sabha polling have been completed.

The highest percentage of voter turnout reported from Thakurdura where voters turned to almost 59% up to 5 pm and voted in all polling stations.

The lowest percentage of voter turnout reported from Badhapur at 51% ,  and at 57% in other two segments at  Kanth & Muradabad rural areas where voter turnout touched at 57 % up to 5 pm.

The above data is highlighting more population turning for vote at polling stations covering rural background.