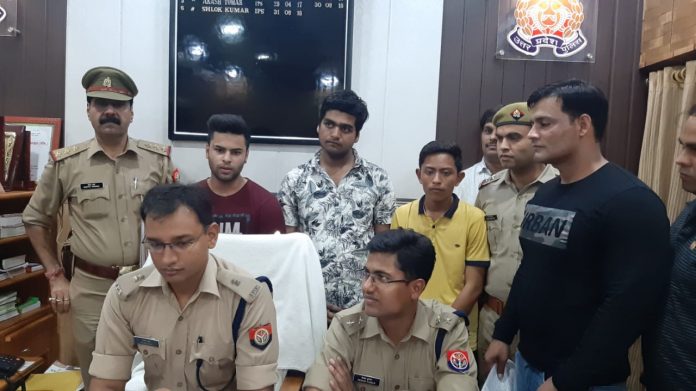 Vansh Manral an eleven year old boy resident of indirapuram who is a student of famous Amity International School Noida. His Father Deepak Manral had received a phone call from an unknown number and the caller was demanding Rs five lacs as ransom. The caller further added if he was not paid the requisite amount he will kidnap his son Vansh Manral.

In a joint opeartion of SOG & Indrapuram Police, a compaign was carried out and also help from electronic Surveillance Cell was taken and caller was atrested and identified as a Shivam Parihar; a resident of indirapuram itself whose age is 20 years only. During interrogation Shivam disclosed two name who were part of this kidnapping case. Further investigation also throw lights on other two involved persons; namely Avnish Garg and Shivansh Bhagat and they were immediately arrested with Shivam Parihar. The police also recovered a mobile phone.

According to Shlok Kumar, SP City Ghaziabad, “Indirapuram police received a complaint of threating, demanding of Rs 5 lacs as a ransom against kidnaping Vansh Manral. Our team did smart work and due to help of electronic surveillince, three accused have been arrested and police seized a mobile phone from which calls were made regarding ransom. All arrested persons are resident of indirapuram itself.”

It was a good andvtimely action of indirapuram in which caller’s were arrested by police. All the arrested three accused involved in demanding ransom from boy family, have been arrested by indirapuram police, who were threating, demanding a ransom of Rs 5 lac from the parents of Vansh Manral. Due to timely action by police the the child; Vansh Dabral’s life could be saved. SSP Ghaziabad also announced reward to whole entire police team who solved this case in very short time.