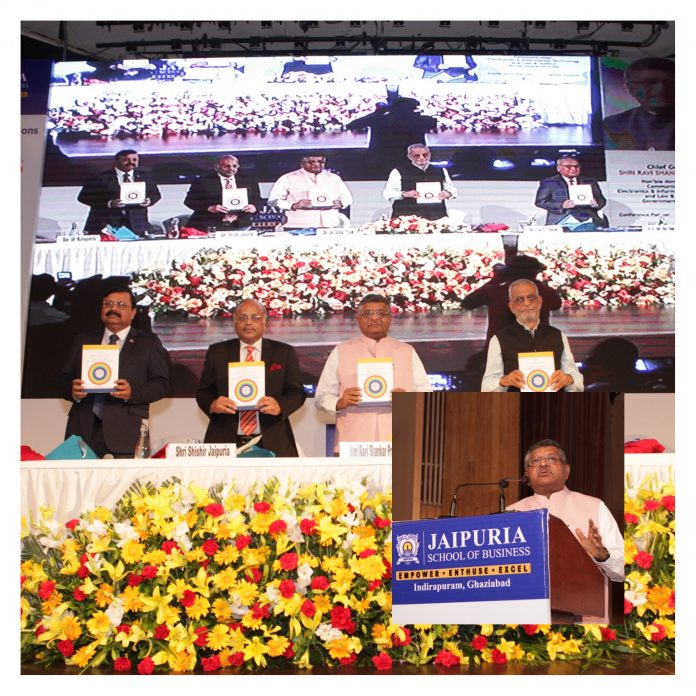 New Delhi: Jaipuria School of Business held an International Conference on “Emergence and Impact of Artificial Intelligence and Internet of Things” on 20th Sept 2019, at India Habitat Center New Delhi. Honble Union Minister of Communications, IT and Law, Shri Ravi Shankar Prasad inaugurated the Conference and delivered the keynote address.

A Book was released on the Conference Theme by the Honorable Minister Shri Ravi Shankar Prasad. He highlighted the rapid growth of the IT Industry in India and how it has been playing a pivotal role in the development of New India. He has mentioned about the steps taken by the Government to leverage the talent of Indian youth and the IT technologies for taking India on the path of accelerated growth towards a 5 trillion dollar economy.

Mr Vijay Thadani, Managing Director of NIIT and Vice Chairman of NIIT University, joined as the Guest of Honour along with Dr Radheshyam Pradhan, Professor of Tribhuban University, Nepal. They emphasized on the knowledge revolution that is taking shape in India powered by new technologies and how these technologies are likely to mitigate many challenges that humanity has been facing for a long time. Presiding over the inaugural session, Shri Shishir Jaipuria, Chairman of the Jaipuria Group of Institutions said that India has a real chance to eliminate poverty & illiteracy and mitigate natural calamities by effective application of Artificial Intelligence and Internet of Things. He complimented the scientists of Chandrayan -2 for making an emphatic statement before the world that India is in the forefront of the new technologies. He added, India has also now earned the reputation of best managers of natural disasters. The meteorologists of India read early warnings in change of weather using AI and help the Government get proactive in preventing catastrophic loss of lives and even property, which were frequent occurrences associated with earthquakes, flood and cyclone only a few decades ago. Dr SK Mahapatra, Director of Jaipuria School of Business proposed the Vote of Thanks.