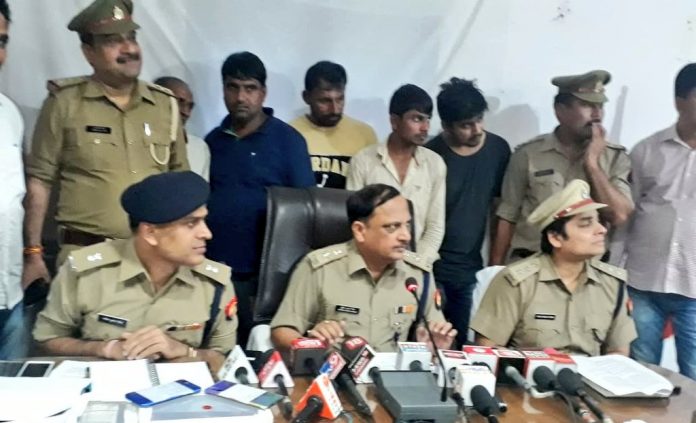 Ghaziabad: PS Kavi Nagar police solved murder murder mystery enterprenure Amit Seth.
Business partner gave contract to kill Amit Seth.
Police nabbed 5 accused and other absconding this regard.
Police recovered 2 pistol, 2 vehicles and 2 Mobile phones from their possession.
Amit Seth resident of Chiranjeev Vihar was shot dead at his house on last 25th Sep,2019.
Police were trying to catch accused but couldn’t get success.
Police had a big challenge to solve this businessman murder case.
After a lot of  efforts police got clue about suspicious person who may be involved this murder case.
According to Sudheer Singh, SSP Ghaziabad ” As per certain information Kavi Nagar police nabbed 5 accused namely Pawan Kumar, Akash,Rohit,Sundar and Veeru from Aatmaram steel tirarahe.
In police investigation it came to notice that Rohit was business partner with deceased. Over Rohit, Amit Seth had a loan of millions which Amit Seth was asking for back but Rohit don’t want to return.
Business Partner  Rohit gave contract to kill Amit Seth and in this regards he gave  2 lakh as first stalmemt.
Business partner  Rohit Gupta made a plan to kill Amit Seth and hired contract killer by help of Sundar.”
” His partner Sagar is still on the run, the police will soon catch him”, Added SSP.