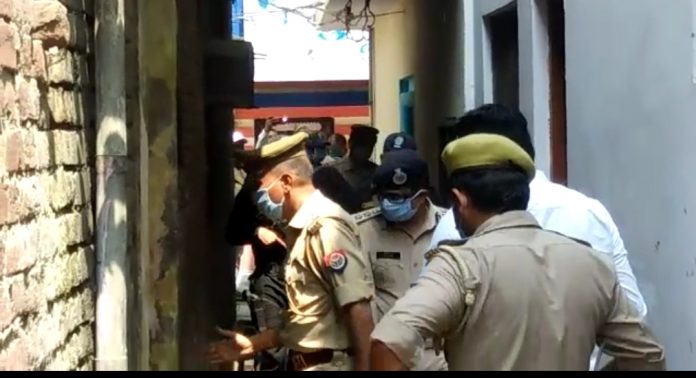 @ Diamond Yadav | Correspondent
Moradabad: Due to a mutual dispute in the Majaula police station area of ​​Moradabad, the brutal killing of father and son beaten with brick stones spread sensation in the entire area, on the information of the day-long double murder, the top police officers also reached the spot.

In the Hanuman Nagar of Majhaula police station area, more than a dozen people attacked the house of a handicapped and beat their father and son to death in broad daylight,
Dabang neighbors attacked Kishan Lal’s house in Hanuman Nagar along with some outside youths, Kishan Lal and his son Rajesh were killed on the spot in this attack, after the information about the double murder caused a panic in the area.  The daughter of Kishan Lal reached the Majhaula police station and reported the incident. In this double murder, one body is found lying inside the house and the other outside the street, the police reached the scene and took possession of both the bodies and clamped down on the accused.

Taking the incident of double murder seriously, Moradabad SSP Amit Pathak also reached the spot and inspected the opportunity of the whole incident and asked for strict action against the accused.

German Government joined hands with Servotech India to promote Vocal for Local, revealed in a conference

Delhi/NCR anewsofindia - November 30, 2020
0
Sudama Pal | Associate Editor New Delhi:  A 27-year-old prisoner was killed by his own partner with a sharp...

Accused of rape and murder, was killed with pointed weapon in...