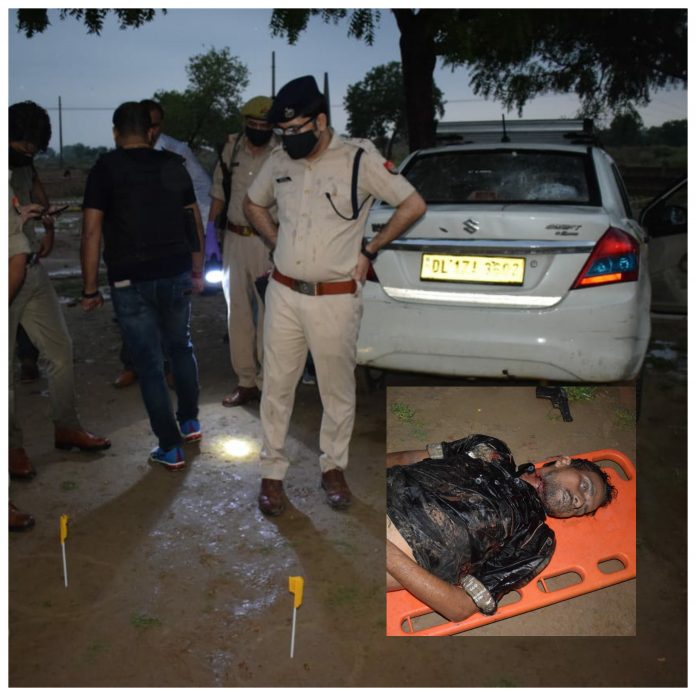 Etawah:  Bauva Dubey alias Praveen R/O Bikru PS Chaubeypur  , close to Vikas Dubey, the main accused in the Kanpur shootout, has been killed by the police in an encounter.

UP Police trying to search Vikash Dubey and his team and raided so many places as per information. In this series a accomplice of Vikas Dubey wad killed in an encounter by Etawah police.

According to Aakash Tomar, SSP Etawah “Around 3 AM on highway near Mahewa PS Bakewar, a Swift Dzire car DL1ZA3602 was looted by 4 armed assailants on a Scorpio. Around 4:30 AM, they were intercepted at kachaura road under PS Civil lines by police and when police parties chased them Swift Dzire collided with a tree and criminals stared firing on police. In the exchange of fire an unidentified person sustained multiple injuries and was declared brought dead at the hospital. One pistol, a double barrel gun and several cartridges have been recovered. 3 others managed to escape on the Scorpio. Have informed all neighbouring districts for intensive checking.”  “The dead criminal has been identified as Bauva Dubey alias Praveen R/O Bikru PS Chaubeypur. He was 50,000 rewardee, an accomplice of Vikas Dubey and was named in the FIR at PS Chaubeypur” said SSP.