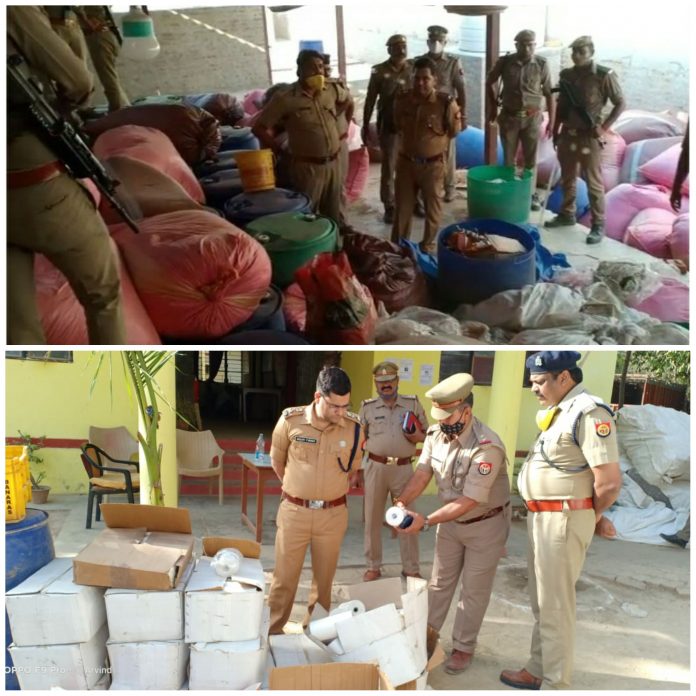 Pratapgarh: Just before Panchayat Elections in Uttar pradesh Pratapgarh police has busted the factory of making illegal liquor late on Friday evening. Police has taken action and recovered illicit liquor and equipment worth Rs 10 crore. During the raid, eight smugglers including 4 women have been arrested from the spot.
The case is of Hathigwa police station area.

Where, within 24 hours, after recovering two fake liquor factory police arrested eight smugglers including 4 women. During the raid, the police has recovered all the liquor making equipment including 96 drum chemical, 26 sack lid, 1.23 vial, 2700 cardboard, 135 boxes of liquor. At the same time, in the guise of liquor mafia Guddu Singh’s farmhouse, the process of making liquor was going on. Guddu Singh, the big liquor mafia of Kunda area, was operating both these factories.

At the same time, alcohol, chemical and straw were buried inside the ground. Police are recovering liquor and chemical after digging from two JCBs in the factory. The operation is going on for more than 5 hours with heavy police force in the area. After which there has been a stir in the area.

While talking with A News Of India SP Mr. Akash Tomar informed that Beet Daroga and Sepoy of Hathigwa area has been suspended in the case, while there is a matter of conducting anti-corruption investigation against Uday Tripathi, former SO of Hathigwa. Liquor mafias Guddu Singh & Sudhakar Singh & more than 30 associates involved in this are being booked by police in FIR.