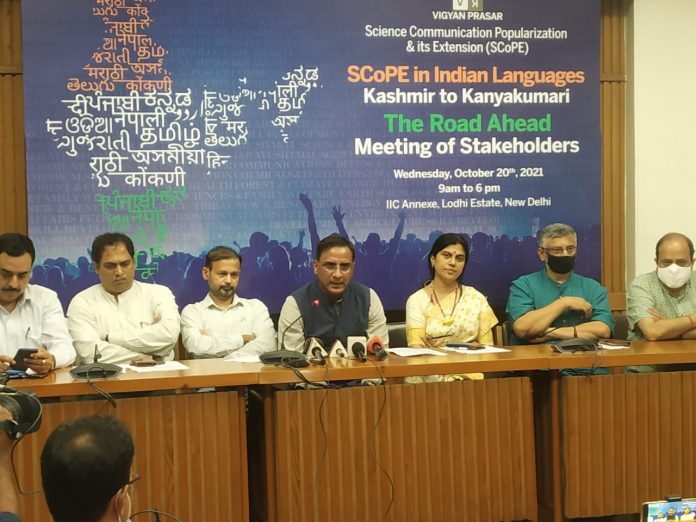 Vigyan Prasar (VP) organized a day-long workshop to review and further plan its flagship project called Science Communication, Popularisation and Extension (SCoPE)-in-Indian Languages (also known as Vigyan Bhasha) at the India International Centre, New Delhi on 20th Oct 2021. Participants from all over the country working in various languages under the project joined this important one-day meeting.

Besides Hindi & English, 50 SCoPE experts/representatives from Urdu, Kashmiri, Dogri, Punjabi, Gujarati, Marathi, Kannada, Tamil, Telegu, Bengali, Assamese, Maithili & Nepali joined the meeting. Science Communicators of national importance came forward to plan actionable items going forward and reviewed the work done so far. These included representatives from universities, science and technology centers and state S&T departments from across the country. A fabulous display of print publications in these projects produced so far was put forth, which was highly appreciated by one and all.

“To ensure quick and effective implementation of Science Communication & Popularisation at all levels in the society, connecting through one’s own language is the first step in this direction. This is why we chose all media products to be designed & developed in Indian languages, “ says Dr Nakul Parashar, Director of Vigyan Prasar and brain behind the project SCoPE-in-Indian Languages. Challenges many but with effective process and devoted team of science communicators, the project has achieved numerous milestones in a very short time period, commented Parashar.
Dr T V Venkateswaran, Scientist F and the National Coordinator for SCoPE-in-Indian Language said “With the arrival of television medium, some predicted the demise of written word. However from whatsapp to twitter, the written words are is seeing a revival in the emerging social media communication. Conversations in the mother tongue is necessary for comprehension of the messages; Project Vigyan Bhasha would mobilise various agencies, both governmental and non-governmental to create a national effort to develop materials in Indian languages”

Purposes / Objectives of this seminar:
• Conversations focused on recognizing the accomplishments of various organizations and movements in science popularization, communication and extension activities.
• Analyse the impact of the activities undertaken by various initiatives, and also act as a bridge to strengthen the relationship between institutions and movements that involve in science popularization, communication and extension activities, and plan future activities.
• Examine the role played by lead ScoPE activities during the COVID communication, in particular address the issue of vaccine hesitancy.
• Initiate and conduct science clubs, launch hands-on activities and learning kits, conduct science communication through poetry & other literary forms, film and documentary screenings.
• Extend its outreach through its own channels across social media platforms in various Indian languages.

Why Indian languages:
• Science communication in the various Indian language goes back decades, translating scientific concepts and terms into their native tongue. Efforts in communicating science in mother tongue was part of the national freedom movements.
• Millions of students undergo their schooling in Indian languages, and providing contemporary information on science & technology in their own mother tongue is imperative to build knowledge society and nurture scientific temper.
• Studying and thinking in mother tongue enhances innovative capacity.
• The policy of the Government of India is to promote all Indian Languages, and the ambitious initiative of Vigyan Prasar is aligned with this policy.

Road Ahead:
Schooling in mother tongue is vital for grasping a knowledge related to science and technology; however, in a world of rapid development of science and technology research, school education received in the past alone is not adequate, and soon would become outdated. Continuous updating of our knowledge as citizens is vital for us to be able to function as a full member in the modern society. Informal learning spaces such as science clubs, science meals, popular science books, science news in newspapers, social media messages provide opportunity for nurturing a learning society. Vigyan Prasar has been created solely for the purpose of kindling interest in science among the masses using all physical and multimedia touchpoints. Public response for Vigyan Prasar’s current activities in regional languages has always been immense and is likely to grow further.

Going forward, Vigyan Prasar plans to reach every district headquarters with field level activities. Taking the baton forward would be the numerous volunteers from various government, non-government, media and educational institutes who have come forward to assist these initiatives in various states and UTs. In years to come, the activities would be expanded into other languages, including tribal dialects in the phase II. Together with resources persons and local support in the respective districts, Vigyan Prasar is poised to become a torchbearer of science popularization, under the umbrella of Project Bhasha initiative.