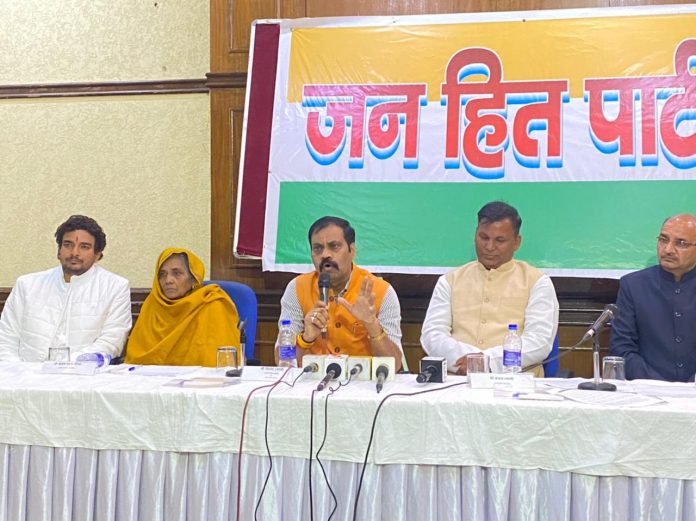 New Delhi: Ahead of UP & Punjab elections, a new political party ‘Jan Hit’ has been formed. The National President of Jan Hit Party Shri Sanjay Tyagi and National Organization General Secretary and National Chief Spokesperson Shri Vinod Tyagi held a press conference on Tuesday, 21st December at Press Club of India, New Delhi and addressed the media persons on the launch of the new party.

Shri Sanjay Tyagi, National President, Jan Hit Party, said, “The Central Government and Delhi State are running on the anti-people policies. The public is being harassed continuously by the government with inflation, unemployment. They continues to harass the youth and the general public mentally & financially.”

He further stressed that attempt is being made to exploit the government treasury. “Teachers are not being regularized by the Delhi government, no employment in Delhi has come through companies, government job vacancies are lying vacancy. The same is the condition of the Yogi Government in Uttar Pradesh.”

National Organization General Secretary and National Chief Spokesperson Shri Vinod Tyagi said, “The people of Uttar Pradesh are aghast. Government job vacancies are not being recruited, every exam paper is being leaked, the atrocities on women are not stopping, farmers’ sugarcane arrears have not been paid till date. Unemployed youth are on the streets, farmers are on the streets, poor brothers and sisters have no employment, common people are troubled by inflation, law and order is weak, government machinery is being misused. “

Shri Vinod Tyagi, National Organisation General Secretary of Jan Hit Party & National Chief Spokesperson, in his address, said, “The police and the administration are forced to work under political pressure, false cases are being filed against the leaders and workers of opposition political parties, governance is being run by advancing the police system, fundamental rights are being violated. It is being done, the rights of the general public are being abolished by dictatorship and fanaticism, the policy of appeasement is being demonstrated openly, conspiracy is being done to seek votes by inciting religious sentiments, the basic spirit of the constitution. The Kejriwal government has made a dirty conspiracy to push the youth towards drugs by changing its excise policy. By taking the decision to reduce the drinking age from 25 to 21 years, he has committed the sin of giving liquor bottles in the hands of the youth instead of the pen. It has created trouble for the women by allowing the liquor shops to open in the residential areas. The work of cutting illegal colonies is being done, the lands of ex-servicemen are being occupied, that too through the government machinery. Both the BJP and the Kejriwal government are the government running on anti-people policies, people have to fight against them. The Jan Hit Party has emerged, the place where the anti-people work will take place, the Party will stand with the general public to protest vigorously.”

Jan Hit Party will fight the MCD elections in Delhi and State Assembly in Uttar Pradesh.