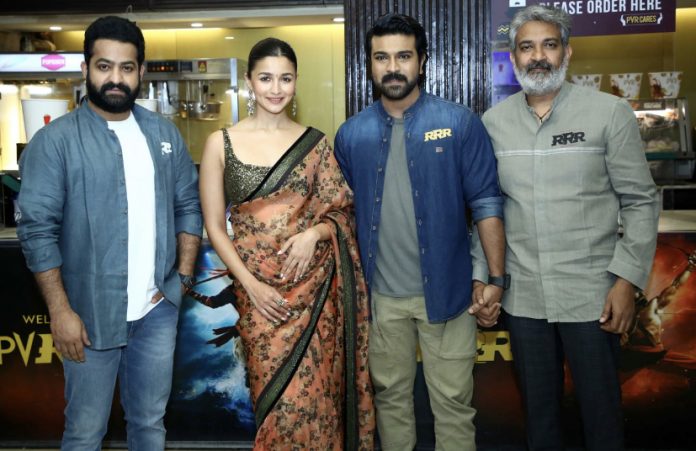 Recently , Alia Bhatt, Ram Charan , Junior NTR And director SS Rajmouli came to Delhi for promoting their upcoming movie RRR. The event was held at PVR Plaza, Connaught Place. After a long wait, the movie is finally releasing on 25th March 2022. RRR is a fictional story of two revolutionaries who fought against British Raj.

While interacting with media, Alia had all Praises for her co actors and Director, She said “It was a phenomenal experience while working in RRR. The way Rajmouli Sir narrated the stories of Amar Chitrakatha was astonishing. I am so grateful that finally the film is releasing as it has been a long journey since 2019.”

This was Jr. NTR’s first visit to the national capital and he was super energetic amongst all. He shared, ” A lot of hardwork is behind RRR. A lot of challenges came across me and Charan, we have shot some crazy action sequences which almost stretched till 65 nights. But the most difficult part was to convince Rajmouli Sir with our performances. “