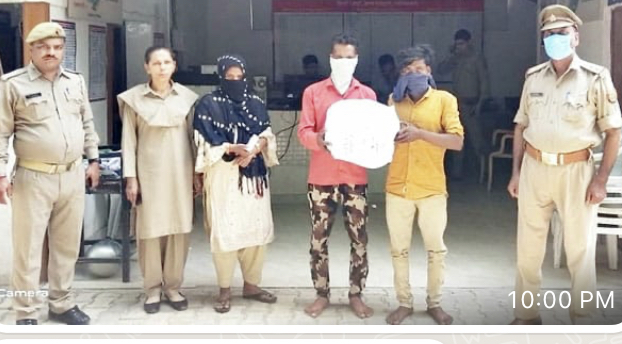 Ghaziabad: A married woman murdered her husband throttling with preplanning for living with her boyfriend for ever. The police have arrested killer wife, her boyfriend and his friend. The drug pills wrapper, blanket and others articles used in killing have been recovered from the possession of arrested accused.

Nandgram Police of Ghaziabad said, it was not suspected murder as the wife of deceased had phone called to her husband’s elder brother informing that her husband is unconscious I’m mysterious situation. Murder was revealed after the autopsy report came.

The Circle Officer of Sihani Gate, Alok Dubey said, Rakesh Sharma had lived with his wife Kusum in new colony, in Nandgram. On the night of May 1, Kusum has passed message that Rakesh has been unconscious suddenly, and he is unable to speak a single word by phone calling Rakesh’s brother, Mukesh Sharma. Getting this Information, Mukesh Sharma, resident of Anoop Shahr, Bulandshahr reached Nandgram with his family members.
They hospitaled Rakesh in district hospital Ghaziabad for treatment where the doctors declared him dead. Mukesh took Rakesh’s body to his village Parli, under Anoop Shahr police station of district Bulandshahr. On May 2 when villagers saw the body, they were suspected that it might be murder, it did not seem natural death.
Mukesh reported suspect about murder to the police immediately. The police reached on spot and sent the body for post-mortem examination. When post-mortem report was received by police, it was confirmed murder. The death of caused was reported throttled. On based of autopsy report, the deceased’s brother Mukesh lodged FIR of murder in Nandgram station of Ghaziabad. When police questioned the deceased’s family members to find out about the wife of Rakesh Sharma.
The CO told, Kusum had marital relationship with Manoj Chauhan, the resident of Bibinagr, Bulandshahr. Ten months ago Kusum had run away with her boyfriend Manoj. Nearly 5 Months Kusum and Manoj lived with each other.

But Rakesh and his family convinced Kusum and she agreed to live with her husband Rakesh and couple decided to live in Ghaziabad. Both were living here in Nandgram in a rented house but Kusum and Manoj had continued their relationship on Ghaziabad also but they want to live freely with themselves. So both planned murder of Rakesh.
On the night of May 1 Kusum feeder overdose of drug tablets to her husband Rakesh and when he became unconscious, she called her boyfriend. Then Kusum, her boyfriend Manoj and his friend Gaurav, resident of Chauhanpuri, Bibinagr Bulandshahr, murdered Rakesh Sharma, by pressing the mouth and throat of blankets.
Kusum, Manoj and Gaurav have been sent jail, said the Nandgram SHO Amit Kumar.