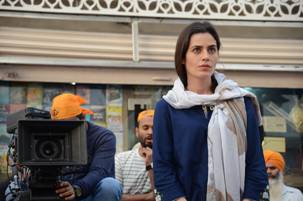 New Delhi: .A Delhi based production company SMA Electronic News Network Private Limited is all geared up to stir the film industry through their upcoming unconventional films with a strong storyline and commendable direction.

‘SENN Productions’ forthcoming film titled Paharganj, Directed by Rakesh Ranjan Kumar, is path-breaking and will be loved for its eccentric characters and script.’ says Prakash Bhagat the producer of the film and founder-director of SENN Productions. The film has been shot in an uncanny and bizarre place located in the center of Delhi called Paharganj. Lorena Franco, a Spanish actress is playing the lead role in it. ‘Paharganj’ is their first venture in the Bollywood film industry.

‘We are not just inclined towards doing mainstream Bollywood films but are also passionate to promote parallel regional films with quality content. We believe regional films of our country are highly underrated and neglected. Thus, our next film in the pipeline is Directed by a National Award winner Rajeev Nath’ says Prakash. The title of the film is – Aniyankunjinum Thannalayathu is a Malayalam film based on a story of a lazy village boy named Aniyankunju, who got involved in a police case. ‘We want to tell unique stories to the audience with the help of some strong independent filmmakers.’ He further added.

Started in the year 2014, ‘SENN productions’ was born with a progressive approach. It is largely known for its meaningful content and profound style of working in the entertainment industry. ‘With a great team and collaborations on board, we are excited to present our work to the society.’ he said.

Both the films have been scheduled to release early next year.