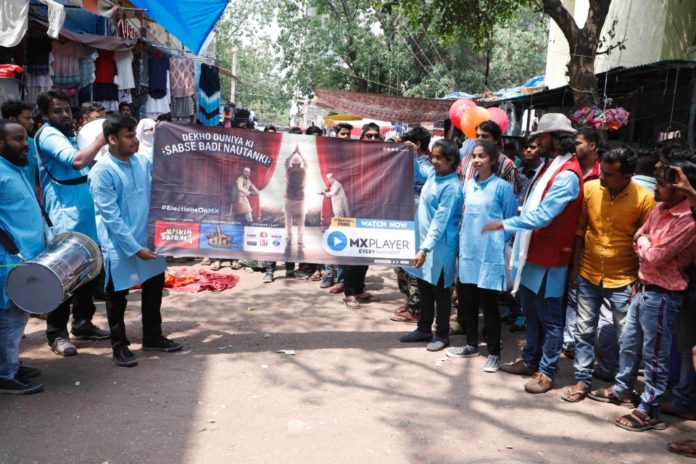 But their promise of offering ‘everytainment’ doesn’t stop there! Adding a dose of entertainment to the heat and dust of the polls, the platform wowed the citizens of Delhi through an entertaining, educative and captivating theatrical! Organized at Sarojini Market, on the 22nd of April, the city saw a group of talented theatre artistes perform a short street play, talking about all the election offerings and shows showcased on the platform.

Apart from Delhi, similar acts are being presented in key cities such as Chandigarh, Mumbai, Bhopal & Lucknow.

The Elections campaign by the platform offers 3 main segments across genres and formats including live debates, live streaming of current events and light hearted comic features.

Here are the highlights of all the election related content that you can watch daily on MX Player, for Free!

Comedy In Elections with “Kiski Sarkar” streaming every Monday to Friday at 7pm, starting April 15

This is a satirical series with a comic view on political news, hosted by India’s most loved stand up artistes – Anirban Dasgupta, Saurab Mehta, Prashasti Singh, Rahul Subramanian, Kumar Varun, Rahul Dua and Nishant Suri. The show laces the hard truth in tongue and cheek humor with 5 segments and a total of 30 episodes that spans 6 weeks.

Live Debate On Elections with “Sawaal Vote Ka” streams every day at 7.30pm

You will find multiple debates raging in the primetime, but we bring you Sawaal Vote Ka – a first of its kind, “live debate” format that pits the common man against the local representative of different political parties in their constituency. Never before has the local public been presented with an opportunity to ask hard hitting questions and demand instant answers. This unique 30-minute live multiparty debate covers 45 different constituencies across various Hindi Speaking Markets with a new constituency being telecast each day. It encapsulates the basic truth of politics – that all politics is local. Unemployment, poverty, scams, corruption – the show covers specific local as well as national issues with candidates from various parties battling it out to win the vote of the community.

On MX Player, you will always be spoilt for choice. This election season, we bring you 76 news channels that you can stream live in either Hindi, English or a regional language of your choice. Our wide range of local channels will provide our diverse audience the most in-depth coverage of their area and issues that matter to them. The platform hosts leading networks such as AajTak, India TV, Times Now, Mirror Now, ET Now, DD News, Tez, News Nation, RSTV, Loksabha TV and Raj News amongst others – keeping you abreast with the latest news and updates while on the go anytime, anywhere.

Only on MX player!