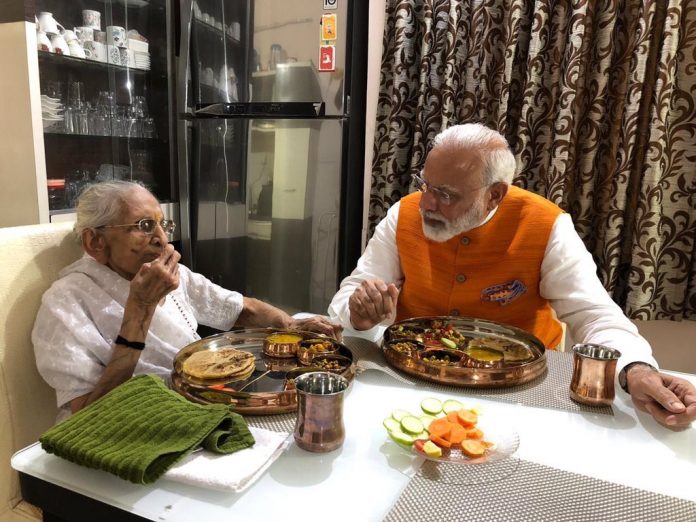 Prime Minister Narendra Modi turns 69 on Tuesday. He met his mother Heeraben at her residence in Gujarat’s Gandhinagar to seek her blessings. PM also had a birthday lunch with mother. Both were enjoying Gujrati Thali. While Last year, he spent his 68th birthday at his parliamentary constituency of Varanasi accompanied by a host of school children. He visited a primary school and celebrated his birthday with students. The prime minister also gave the students a number of gifts.

PM Modi had arrived in Gujarat late on Monday. The PM visited Sardar Sarovar Dam in Kevadia this morning to review programmes and projects, including the Statue of Unity and the Sardar Sarovar Dam on the river Narmada. PM Modi’s visit comes as water levels in the Narmada dam, which he inaugurated in 2017, have reached the highest mark of 138.68 metres. He opened the “Namami Narmade Mahotsav” along with Gujarat Chief Minister Vijay Vijay Rupani and offered prayers at the dam site. PM Modi later addressed a public meeting in Kevadia, a town approximately 200 km from Ahmedabad, where Statue of Unity is located.