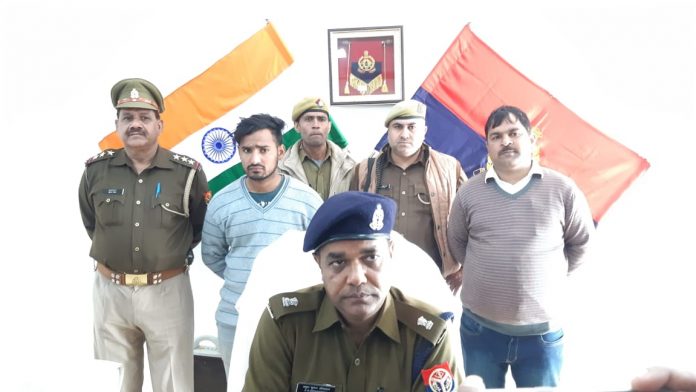 Bulandshahr: Sikandrabad police got big success in arresting of couple who was involved in murder of young lady.
Police seized a Honda city car and belt from their  possession.
Due to love a young lady was murdered by her greedy lover. This case is not less than filmy or serial like crime petrol and other.
On dated 25th Jan,2020 PS Sikndarabad Inspector received a missing complain of young lady by her father. As per complain She may be kidnapped by his lover namley Kapil.
SHO Sikandrabad Suraj Singh made a team and started searching of Poonam as per her fathers input.
Finally police got a clue and first arrested Kapil so called lover  regarding Poonam missing case.
After arresting of kapil, accutal strnge truth came out front of police.
According to Atul Srivastava SP City Bulandshahr, ” Inderjeet father’s of deceased Poonam made a complaint name of Kapil, as per received complaint police started investigation of this case and after arresting of Kapil, truth came out, Kapil had already girl friend. He want to marry with her but her parents denied for marriage. Watching Crime petrol and savdhan India he made plan and according to plan. He offered for love to poonam who was working in Lava comany at Greater Noida. On dated 25th Jan,2020 Kapil murdered poonam and hided her body in his girl friends home (Kapils first Girlfriend).
Police also arrested his girlfriend and recovered Belt and Hondacity car which used by Kapil for murdering of Poonam.” ” The main reason was this murder is that Kapil wanted to marry with his first girlfriend at any cost thatswhy he murdered Poonam and wanted prove this deceased as his girlfriend” said Atul.