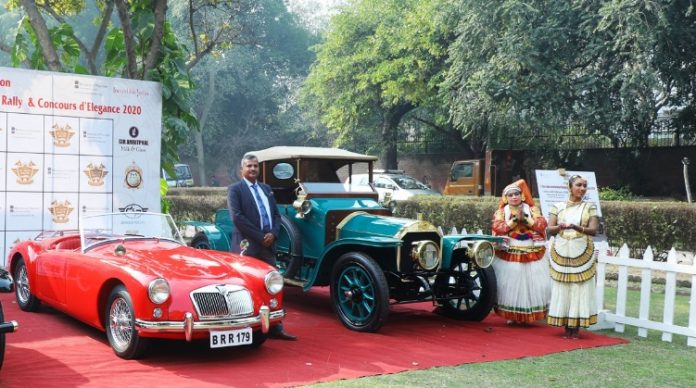 New Delhi:Celebrating the spirit of motoring, the 21 Gun Salute Heritage Cultural Trust is all set to take you back in the bygone era with its 21 Gun Salute International Vintage Car Rally & Concours d’Elegance that displays rich automotive heritage and pays tribute to the golden era of the automotive industry. Now in its ninth year, the 21 Gun Salute International Vintage Car Rally & Concours d’Elegance has grown to become one of the most anticipated and talked-about automobile events of Asia, and the 2020 edition promises to be the best one yet! Mark the dates, on 15th February the rally will flag off from Historic India Gate and on 16th Feb Concours d’Elegance at Karma Lake Lands Gurugram.

Not only, will this opulent celebration of Heritage Motoring bring together an ostentatious display of rare Vintage & Classic Cars, from all around the world this February, but will also earmark an important milestone in the history of heritage motoring in India with the premiere of a historic 23-day long royal expedition – the Incredible India Rally being organized by the 21 Gun Salute Heritage & Cultural Trust in association with the Government of India, Ministry of Tourism. This extravagant celebration of Heritage Motoring & Indian culture will begin on the 17th February 2020 and will pass through the historic & scenic cities of Haryana, Uttar Pradesh, Rajasthan, and Gujarat. The last day of the rally will culminate in the gorgeous city of lakes, Udaipur on 10th March 2020 where the participants will experience the Festival of Colors, Holi, in all its glory.

The Incredible India Rally will cover 17 cities, 4000kms in 23 days and will be an ode to the Global Heritage Motoring & Historic Indian Culture and together would mark the beginning of a new era for India and for the patrons of Heritage Motoring in India & worldwide.

“Indian Culture and Heritage Motoring are the two strong pillars of our Concours. Both aspects highlight that the 21 Gun Salute Concours Show is of special importance and attract both participants and visitors. For the past 8 years, the event has grown in all aspects to become a magnificent show that attracts tourists and motoring buffs from around the world,” commented Mr. Madan Mohan, Chairman & Managing Trustee – 21 Gun Salute Heritage & Cultural Trust, & The man behind the Asia’s most Premier Heritage Motoring Show.

While doing another announcement Mr. Madan Mohan further added that “Not just this, the relentless enthusiasm to create something larger than life, made us take a recess, in the year 2019 to appraise and conceive the most impressive, and the grandest royal expedition – The Incredible India Rally. The 4000 km long rally will entirely focus on promoting the Cultural Diversity and the Royal Heritage of the most vibrant and royal states of our country – Haryana, Uttar Pradesh, Gujarat & Rajasthan. This royal expedition would be a tremendous step in generating interest in global tourists to experience the grandeur of India. Along with international participation from 15 motoring enthusiasts from around the globe, the Incredible India Rally would be our biennial effort to promote India as a global motoring tourism destination on a global platform. The Incredible India Rally will bring forth an enormous tourist footprint to our country.

Supported by the Government of India, Ministry of Tourism the Incredible India Rally will be India’s most exclusive and unforgettable heritage motoring rally that will commence on 17th February 2020, and include 17 check-in stops, and stay in different cities, before finally culminating in Udaipur on 10th March 2020.”

Supported by the Government of India, Ministry of Tourism in association with 21 Gun Salute Heritage & Cultural Trust, this will be one of the most élite & exhilarating car rally wherein, renowned motoring enthusiasts along with their masterpieces will travel together to unique destinations in India, stay at palaces of erstwhile Maharajas of India, dine with royal families at palaces, visit colossal forts of the Maharajas; while building lifelong bonds tied by the thread of motoring & heritage, along the way! Incredible India Rally will be one of India’s most exclusive & unforgettable heritage motoring rally that will, for the first time, cover palaces of Rajasthan & Gujarat; offering an ultimate experience.

21 Gun Salute Concours d’Elegancehas already attracted eye-catching entries this year with the number heading for the 150-mark. Every masterpiece at the show field is handpicked and has never been a part of our show before. The event has attracted participants from various parts of the World including Germany, France, Belgium, USA, and from various parts of the Country including Delhi, Mumbai, Bangalore, Lucknow, Bangalore, Chennai, Jaipur & Ahmadabad. The basic premise was to have rare cars drawn from all over India for different classes including Post-War European Class, Post-War American Class, Pre-War American Class, Preservation Class, Mg Class, Pebble Beach Class, Jaguar, and Daimler Class, Rolls Royce Class, Indian Heritage Class, Classic Volkswagen Class, Bentley Class, Edwardian Class and a few more to select the Best of Show.

21 Gun Salute International Vintage Car Rally & Concours d’Elegance draws a gathering of an international jury panel comprising 37 motoring experts and many renowned classic car experts, FIVA officials, restoration experts, FIVA scrutineers, F-1 racers and many other celebrated individuals from all over the world, along with 150 selected cars, which are handpicked to participate, after careful selection. The authenticity of the cars, their style, design, rarity, and their majesty are the focus of this competition for Elegance. This year, we have some amazing vehicles lined up to compete in what will be an incredible beauty competition of vintage and classic cars. The exclusive gathering of thousands of collectors and connoisseurs also supports the charitable foundation for differently-abled children. The two-day event will be further continued with a 4000 km long rally that will entirely focus on promoting the cultural diversity and the royal heritage of India. The rally will witness international participation from 15 motoring enthusiasts from all around the globe.

Mr. Madan Mohan is a renowned figure within the global motoring fraternity and has been a life-long car collector and enthusiast. He never lost sight of his automotive fascination, which in one regard, became a reality in the year 2000, when he purchased his first-ever vintage car Dodge Victory 6, 1928 (previously owned by Raja Saheb of Khetri). Now, in 19 years, he owns 328 vintage cars, 43 jeeps, and 106 bikes along with clocks, typewriters, and other antiques. He has been a part of the jury panel at various global motoring shows that include Masterpieces Concours d’Elegance(Germany), Concours d’Elégance Suisse (Switzerland), Zoute Concours d’Elegance (Belgium), Hampton Court Concours (UK), Trump National Concours d’Eleganceand La Jolla Concours d’elegance (U.S.A).

He strongly believes in preserving India’s automotive heritage, and the 21 Gun Salute International Vintage Car Rally & Concours d’Elegance aims at taking forward his vision of establishing India as a World-Class Motoring Tourism Destination. Mr. Madan Mohan is the backbone of this heritage motoring venture that narrates the untold legacy of motoring, and the rich cultural heritage of India, adding a new facet to Heritage Motoring in India.