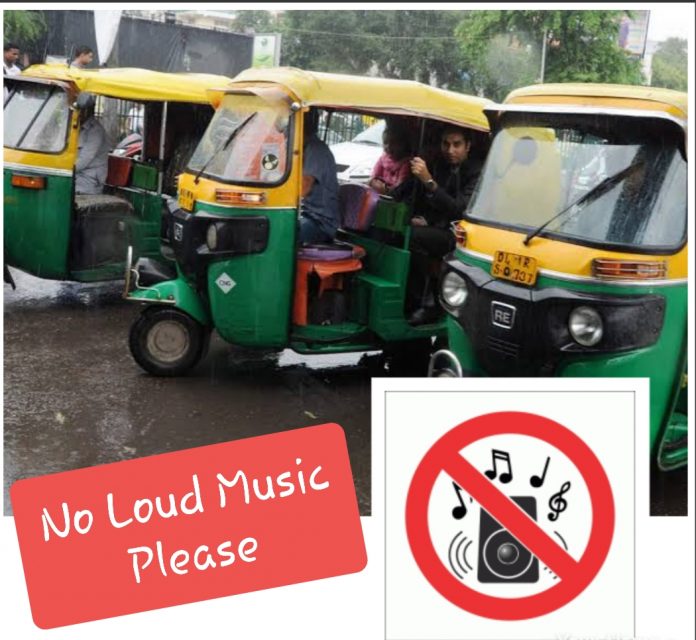 Ghaziabad: Police going to start action on auto rickshaws, E-rickshaws who use music system in high volume and motor bikes and other vehicles who used to make nuisance by retrofit bullet silencers to lod exhaust sound users of pressure horn in all vehicles. SSP Ghaziabad; Kalanidhi Naithani have given instructions to all police stations of Ghaziabad for taking strict action aganist these auto rikashaws, taxi, E-rikshaws who used to high volume music or sound after installing music system in their vehicle.

Police are going start challan such auto-tempo in which the music system which are used at full pace. Many time the women and elders sitting inside the vehicle and such drivers using and playing some times vulgar songs are serious offence and the children are also scared of it. This move of the police will provide relief to the women travelling alone in the commercial vehicle of the city.

This initiative of the police will also provide relief to those working women, who sit in a taxi daily and commute in commercial vehicle go to the office for work. It is often seen that if a female sits in an auto-rickshaw, then the vehicle drivers also express comments and or uses vulgar songs that too in full volume, which makes the journey difficult for alone women travelling in commercial vehicle.

The SSP, Ghaziabad;. Kalanidhi Naithani has instructed all police officials under his jurisdictions, police in-charge and traffic policemen to take strict action against such violators of autosrickshaws, taxis. It is very commonly seen that music is played in loud volume in almost all auto rickshwas, tempos and e-rickshaws due to which women, elderly and children feel insecure and irritated. This is a very common phenomenon on the streets of Ghaziabad where most of the commercial vehicles using loud music and also vulgar songs. Many a times, drivers use such vulgar songs and in those conditions women feel very hunted and unsafe.