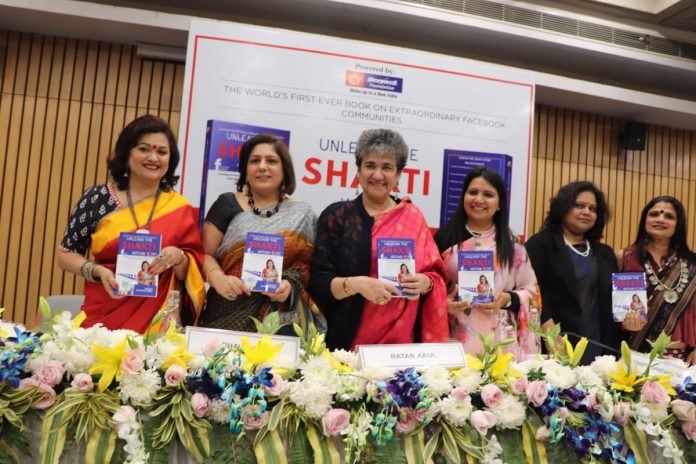 11 powerful success stories to turn your life around !11 amazing Facebook

Groups that are changing lives the world over ! 11 extraordinary group
founders who believed in the strength of collectivity and created empowering
communities!!!

The More you give to Society, more you get back. And if you decide to
make the best of yourself, nothing can stop you : Sapna Khandelwal,
Author of Book

February 14, 2020 : Inspired by a conclave of the founders of India’s 40 leading
Facebook groups, held in Delhi in October 2019, for which Sapna Khandelwal,
as founder of Facebook group IndiaSareeChallenge, was invited, the book is
powered by Sleepwell Foundation. In the words of Namita Gautam, Chairperson,
Sleepwell Foundation, “The book echoes the Foundation’s ethos of uplifting society
by tapping the inner strength of the people”.

The launch of the book at India International Center on 13th February, was a stellar
event, attended by over 200 people and graced by public ambassador and literary
heavyweight Ratan Kaul, founder of the Delhi Literature Festival, as Chief Guest.
“I am eagerly waiting for the translation of the book in Hindi and other local languages,”
she said.

The book was inaugurated by Tripti Shinghal Somani, founder of Womennovator, the
virtual incubator for facilitating innovative women across the country. Addressing the
audience, she exhorted them, “We all need to do our bit to uplift society, especially
by supporting enterprise in women”.

Many of the extraordinary changemakers featured in the book were also present at
the book launch and shared the secrets of their success with the spellbound
audience. “It is crucial for women to prioritize their relationship with themselves if they
want to realise their potential,” said Dr. Shivangi Maletia of Queen in the Making.

Rinku Shah of Fitness2Flash, who had flown in from France to attend the event,
emphasised, “It is important to focus on fitness and health, rather than just weight loss”.
Social entrepreneur Swati Jain, founder of WeWomen asseverated, “Women can
best be supported by other women”, while Priyanka Bhatia shared her motivation for
founding Women on Wealth: “The WEF 2017 survey on women’s economic
participation placed India at 139th position among 144 countries!”.

Chef Arun Chanda of Great Chefs of the World lauded the growing food blogger
industry: “They provide great exposure and are adding immense value to the food
industry”. Shradha Gulati of Reimagine Travelling revealed, “Travel opens the mind
and the heart through new experiences”.

The launch event, which was moderated by the renowned Madhavi Advani, included
a discussion on the power of Social Media in empowering contemporary societies.

The hosts, Vandana Khandelwal and young Kritvi Methi enlivened the
event through interactive interludes with the audience, which created a highly
responsive and positive ambience.

The author, Sapna Khandelwal, held the audience spellbound with her eloquence. “It
is possible for everyone to achieve whatever they wish, if they uplift their own
thought process, accept their circumstances and work around them without blame or
complaints”.

Dr. Shivangi Maletia Jangra, founder Queen in the Making said “ for anyone to live
upto their Potential it is very important to prioritize my relation with myself”

Rinku Shah, founder, Fitness to Flash said “ Women still hesitate to give priority to
their own needs, Especially their health. They need to force on health and fitness
rather than weight less.”. Discussion About the positive changes brought about by
social media in people’s lives.

Priyanka Bhatia, founder, Women on Wealth said “ india stood at 139th position out of
144 countries Surveyed by the World Economic Forum 2017 on the criterion of

Women’s Economic Participation That says it all”.

Shradha Gulati, founder, Reimagine Travelling said “ Travel opens your mind and yours
Heath to the world”.

Vandana Gupta, Anchor of the Book Launch and founder Devditi Foundations said ‘ it is
very easy to contribute financially to society. But it is much more important to give
something of yourselfBy becoming personally involved. It really gives you meaning in life “.