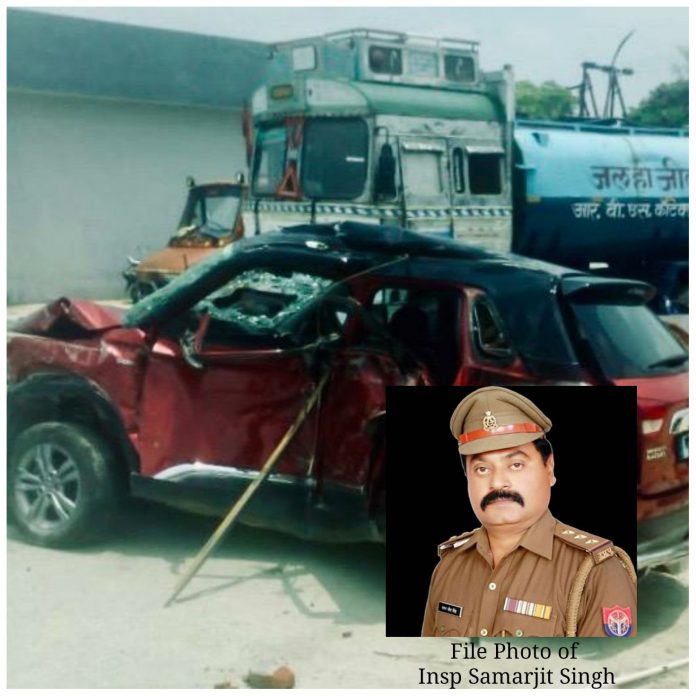 Uttar Pradesh: Inspector Samarjit Singh was going with his family. He died in a road accident near Saifai on his way from Ghaziabad to Varanasi.

According to the information, Samarjeet was going with his family on Friday. On the way to Ghaziabad to Varanasi, car collapsed near Saifai. In this, along with Samarjeet, his father-in-law also died on the spot. Five people including a wife and two children were in the Brezza car.

The Policemen of all the districts of the state are Sad with the death of Samarjeet. He was also known for bettering his personal relations and living with liveliness, along with police duty.

While talking with ‘A News Of India’ SSP Etawah Sh. Akash Tomar Said “Insp. Samarjeet Singh (Crime branch, saharanpur) was travelling on 5 days leave from ghaziabad to siwan with his sons and in-laws. Around 108 KM mark on Expressway, his car started to skid towards right and his son who was driving the vehicle applied handbrakes to control it. Insp Samarjeet Singh, who was sitting on the adjacent seat, steered the car towards the opposite side causing it to lose control. It collided on the barrier on the side of the road.

Insp Samarjeet Singh and his father in law , Kamlesh Singh (77) were declared dead on arrival at PGI Saifai. His 2 sons, brother in law and nephew have sustained minor injuries.”