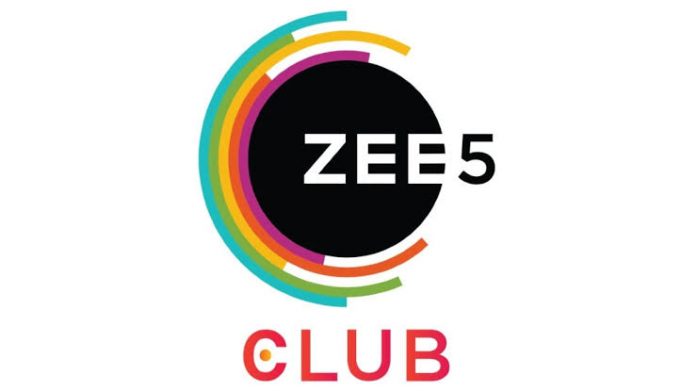 New Delhi: ZEE5, India’s Entertainment Super-app today announced the launch of ‘ZEE5 Club’, a unique proposition for every Indian @ ₹365/year. This is in line with its commitment to democratise access to bespoke content for diverse Indian audiences across genres, languages and a spectrum of devices.

ZEE5 Club, a complete OTT television entertainment pack is set to delight the consumers with exclusive access to most popular shows before telecast on TV,   apart from select ZEE5 and Alt Balaji shows, – 1000+ blockbuster movies, ZEE Zindagi shows and over 90+ Live TV channels. With ZEE5 Club, subscribers will be able to enjoy – engaging entertainment content without any intrusive ads and across devices.

Speaking about this new offering, Rahul Maroli, Senior Vice President and Head SVOD, ZEE5 India said, “We are a customer obsessed OTT platform and the launch of ZEE5 Club is a result of the feedback we received from our consumers. Furthermore, democratising access for all Indians to their favourite entertainment content, at a value price, was brewing as an idea for the longest time. With a strong consumer value proposition, ZEE5 Club will help us to board every Indian and provide them with a hyper-personalised and a seamless content viewing experience all at ₹365/year.”

The launch of ZEE5 Club would enable millions of Indians to sample their favourite TV shows and OTT exclusives at their convenience at an affordable price. The Club Pack has been created keeping in mind the platform’s diverse user behaviour, regional preferences and viewership patterns.

Some of Zee’s popular TV shows like Kumum Bhagya and Kundali Bhagya in Hindi, Sembaruthi in Tamil, Jothe Jotheyali in Kannada and Mazya Navryachi Bayko in Marathi and many more would be now available on ZEE5 Club before telecast on Television, making anytime a new prime time for consumers to catch up on their favourite shows.