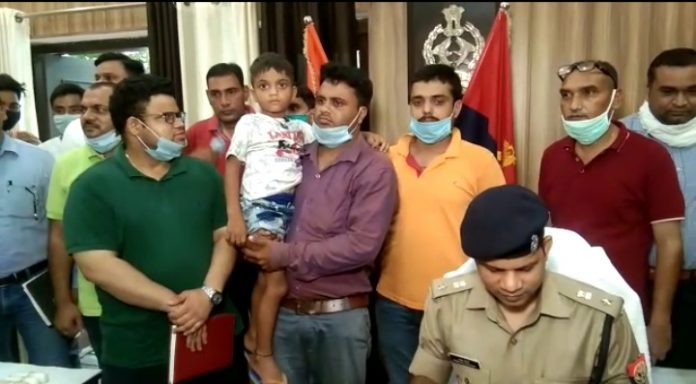 Moradabad: A five-year-old kidnapped child was rescued from the bus in  Kaushambi  Ghaziabad by the police, Moradabad SSP confirmed this at a press conference.

Gaurav  lives in Line par areas in Moradabad with his family. Yesterday his five years son gone miss from his residence. He tried to search but couldn’t get success. Gaurav received a ransom call in which caller was demanding 30 lakhs rupees for releasing Gauravs 5 years son. Gaurav  registered a complaint to police. As soon as received kidnaping complaint, Moradabad Police came in action, Moradabad SSP took this seriously and made many team’s regarding this.

While making this kidnapping a question of nose, forming several teams, started investigation from every angle, today Moradabad police got success in this case when Ghaziabad police recovered the child from Kaushambi bus stand,  According to prabhakar Chaudhary, SSP Moradabad, ” As soon as we received complaint about kidnapping of 5 years child. We made police teams and started investigation this matter finally we got success in rescued this five years child from Kaushabi bus stand in Ghaziabad.” “Police are trying to arresting of kidnapers, soon those will be arrested,” said SSP.

As soon as we received information about child the kidnapper escaped leaving the child  in the bus, the police arrived in Moradabad with the child. Chaudhary disclosed the whole incident and exposed the child to everyone, stating that the kidnapping  Doers and those seeking ransom of three million are on their radar, soon they will also be caught by the police, and the SSP said that the IG team announced a reward of fifty thousand rupees to the police team who recovered the child.