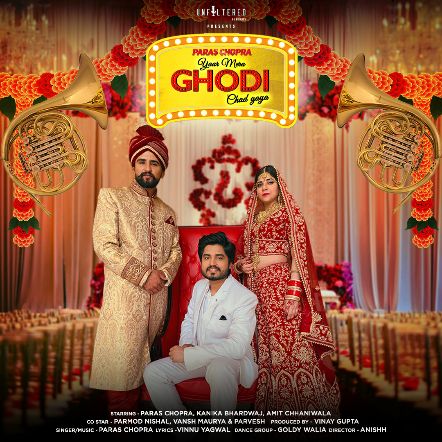 With the wedding season around the corner, the need for good tracks to shake your legs on are of utmost importance. In that case, ‘Yaar Mera Ghodi Chad Gaya’ by Unfiltered by Koinage is all set to put your search to rest with its release today. It is a peppy Punjabi wedding song, perfect for your friend’s wedding, especially if you are from the groom’s side.

Yaar Mera Ghodi Chad Gaya is sung and composed by Paras Chopra, and features Kanika Bhardwaj and Amit Channiwala, along with Paras himself. The video is full of fun and is well picturized by Anishh. Throughout the video, the groom’s friends seem super excited, from having fun at the wedding to madly dancing on the floor.

On the occasion of the song launch, Paras said, “Wedding is an occasion, people attend to have fun, and dance, especially if it’s your friend’s wedding. Throughout the video that fun and excitement is portrayed from its video to its lyrics. I had a blast while shooting and recording it. I am hoping people will also love its vibe and enjoy dancing to it at weddings.”

Paras Chopra is a multilingual and versatile singer of the music industry. Since his childhood, he was fascinated with music and inculcated the talent of singing at a very young age. He completed his BBA and MA in Music from MDU, Rohtak. He ventured into the music industry in the year 2018, after the completion of his studies. And in just a couple of years, he won the hearts of people with his music and singing.

He has given music for many independent songs and also produced a song ‘Tere Aane Se’. He was previously featured in a Haryanvi song, ‘Olha’, which was sung and composed by him, and the song crossed 1 million views on Youtube in the first week of its release only. His other Haryanvi song ‘Pehla Pyaar’ also crossed more than 1 Million views in mere 24 hours on Youtube.