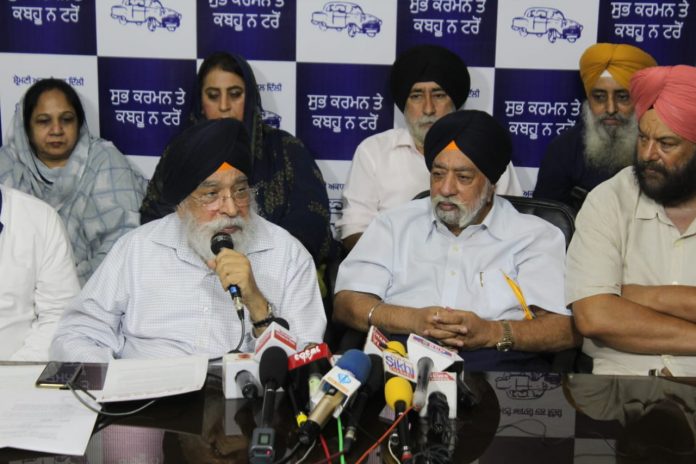 NEW DELHI – Facing a lookout notice in connection with the massive fraud at the DSGMC, golak-loot suspect MS Sirsa received another major setback after the Delhi High Court sought an explanation from him regarding the audit report of gurdwara books, which he has refused to share, the SADD informed Guru ki Sangat.

Party chief Paramjit Singh Sarna told a news conference that the High Court served a notice to Sirsa and global accounting and consulting firm Deloitte for a response regarding their audit of DSGMC finances, which are suspected to have been siphoned off by the Badal gang into their personal coffers.

The notice came in response to a plea filed by the SADD that sought court directions to the DSGMC and Deloitte to make the audit findings public.

“Sirsa is now bound to explain what stopped him from sharing the Deloitte report on DSGMC books with Guru ki Sangat,” Sarna said. “Deloitte too has to file its own response as the finances it was commissioned to audit didn’t belong to any one individual or gang. The Sangat is well within its right to know how Sirsa presided over the brazen loot of gurdwara treasury in order to fill his and his masters’ personal vaults,” the Panthak leader noted.

The court, in the meantime, also rigorously enforced the poll code after reports emerged that Sirsa was doling out temporary jobs to hundreds of residents of Punjabi Bagh from where he is desperately trying to seek re-election. Reports also suggest that the outgoing DSGMC president was splurging golak funds on his personal campaign, including attempts to buy and pressurise voters already employed in the committee’s schools, colleges and at historical gurdwaras. “The court’s move to strictly enforce the poll code and bar Sirsa from misusing his office vindicates our assertion that the Badals are exploiting gurdwara resources for their own advantage in the upcoming DSGMC elections,” Sarna said.

The SADD holds the Badals solely responsible for the total collapse of the DSGMC over the past eight years.

The Deloitte audit came under Sarna’s pressure as he sought accounting of more than Rs 120 crore that have been drained out from the DSGMC exchequer after the Badals took control of Delhi’s Sikh religious administration in 2013.

“In addition to Rs 120-crore-plus that we left in the gurdwara treasury while demitting office, another Rs 250 crore believed to have been generated in revenues during these eight years has also been embezzled. It’s a shame that the president of an elected gurdwara committee has now a lookout notice issued against him by the economic offences wing of police. Never ever in Sikh history has a gurdwara leader faced such grave accusations that seek to prosecute him for the robbery of Guru ki Golak,” the SADD chief observed.

He, however, described the total embezzlement of more than Rs 350 crore from the DSGMC exchequer as the tip of the iceberg.

In bullet points, the Panthak leader issued a complete list of the massive blows Sirsa and his Badal masters have delivered to the Delhi Sikh Gurdwara Management Committee since 2013:

• Complete draining of more than Rs 120 crore from the gurdwara exchequer to personal coffers of the Badals in eight years
• Complete draining of another Rs 250 crore estimated to have been generated during the eight-year period
• Criminal cases against DSGMC presidents, Sirsa included, for fraud, forgery, golak loot
• Hiding Deloitte audit of gurdwara finances from the Sangat
• Complete collapse of DSGMC-affiliated GHP schools, Sikh colleges
• Mounting unpaid salary bills of GHPS, DSGMC staff
• Mounting dues to the UGC/central authorities for college affiliations
• Unaccounted shipping of donated critical-care equipment, oxygen concentrators from DSGMC stocks to Badal constituencies
• Accepting money from Amitabh Bachchan for health facilities, but not disclosing the source till the truth was revealed by the actor
• No audit/account of Rs 12 crore donated by Amitabh Bachchan
• No audit, no accounting of donations generated from bogus announcements of a Badal-led Nagar Kirtan from New Delhi to Sri Nankana Sahib in 2019. That Nagar Kirtan never took place but tons of cash and gold was generated in donations in its name
• No audit/accounting of donations generated in the name of pandemic sewa. At least Rs 40 crore is believed to have been siphoned off from pandemic charity
• Grave damage to Panthak Maryada, to Sikh Sidhant, to sanctity of Gurbani, to sanctity of Sikh history under the Badals
• Guru Sahiban paraded as idols in Nagar Kirtans, Karva Chauth celebrated at Sri Bangla Sahib, Guru Harkrishan Sahib sent to quarantine, Chaar Sahibzadey belittled as “baals”, or kids, cake-cutting proposed at Sri Rakab Ganj Sahib to celebrate Florence Nighingale’s birthday, vulgar dance and song routines green-lighted on the sacred compound of Sri Rakab Ganj Sahib, history linked to the Gurus’ martyrdom twisted on several occasions, Guru ka Langar wheeled out of the Pangat to political constituencies, sewa auctioned off on TV, calls for raising money without accountability on television

“We appeal to Guru ki Sangat to immediately inform us or the police if they get to know that Sirsa is trying to flee the country. The golak thief and his gang must be brought to justice and delivered exemplary punishment per the law of the land,” Sarna said.