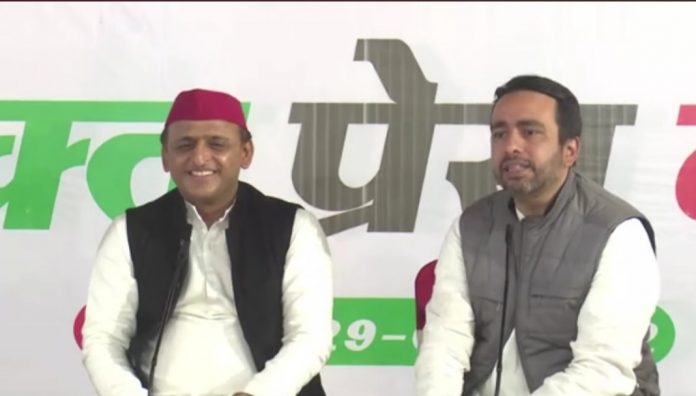 Ghaziabad: The national president of Samajwadi Party Akhilesh Yadav said here on Saturday that the alliance of Samajwadi Party, Rashtriya Lok Dal and others is going to come in power with majority on 10th March. The public has decided to vote anti government in assembly elections 2022 in Uttar Pradesh. The SP-RLD and others alliance will eliminate the negative politics of Bharatiya Janta Party in coming months.

Akhilesh Yadav was addressing media persons in a farm house located at Dasna, National Highlyway-9 with Jayant Chaudhary, the chief of Rashtriya Lok Dal. He said, ‘ If it would coming SP-RLD and others alliance government in UP, alliance government will start Samajwadi Canteen and Provisional Store through out the state and there will be available complete food for ten rupees only. There two topics are including additional in his manifesto.

“The Samajwadi Party will plan to arrange special package for payment to sugarcane farmers, employment to youth in IT sector and with a addional special package for Ghaziabad Industrial Areas, the cycle industries will be revived. The SP has special honour for cycle as it is the party symbol of Samajwadi Party.”added Akhilesh Yadav. The SP -RLD alliance is going to get historical victory in current assembly election of UP.

Jayant Chaudhary, the chief of RLD said, “We are educated politicians and know only the language of development and employment. We don’t believe to create fractions among the people of all communities. Our moto and slogan is also ‘Brotherhood.’ We flight to justice for farmers, labourers, villagers and poors without any discrimination of castes and community. He said, it is the appropriate time to teach lesson to Bhartiya Janta Partyfor all farmers, labourers, common men and public who have been victims during Yogi in UP.