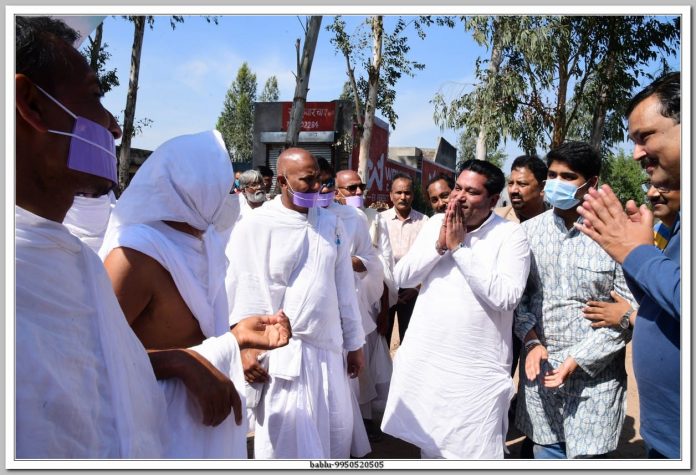 The teacher-disciple relationship is very sacred and unique. While the disciple is grateful after receiving the Guru’s darshan and blessings, the Guru is also considered to be the master of the disciplined behavior and affection of the disciple. This is the reason that if the disciple is unhappy, then the guru also does not care about his sufferings and goes through anything to get the disciple benefited. Something unique was seen at that time, when the eleventh Anushasta Acharyashree Mahashramanji of Jain Shwetambar Terapanth Dharmasangh, creating a new history, did the maximum 47 kms in a single day in the Acharya tradition of Terapanth. At around 6 pm, Acharyashree Mahashramanji gave darshan to the governing mother Sadhvipramukhaji, who was recuperating at Shri Balaji Action Hospital, Delhi. The special thing is that on the arrival of Acharyashree Mahashramanji at Shri Balaji Action Hospital, Delhi, to benefit from his darshan. Vikas Malu, the son of Moolchand Malu and the director of Kuber Group, along with his family members, blessed his life by getting the blessings of Acharyashree.

After seeing his guru, Sadhvipramukhji Kanakprabhaji, who was undergoing treatment in the hospital, was seen in Pulkit, then Yugpradhan Acharyashree Mahashramanji was also very happy. In fact, in the absence of health compatibility of Saamna Mata Sadhvi Pramukh Shri Kanakaprabha ji, like a simple-hearted child, by changing all the pre-planned programs to increase the spiritual morale of the mother of government, for seven consecutive days, reach Delhi by taking long walks and sitting on the floor in the hospital. Worshiping the mother of government is an incomparable and unmatched example of the simplicity and humility of Yugpradhan Acharya Shri Mahashramanji. In this way, the seeker of equality, Akhand Parivrajak Acharyashree Mahashramanji wrote a new golden chapter in Terapanth Dharmasangh to give darshan to the mother of government.