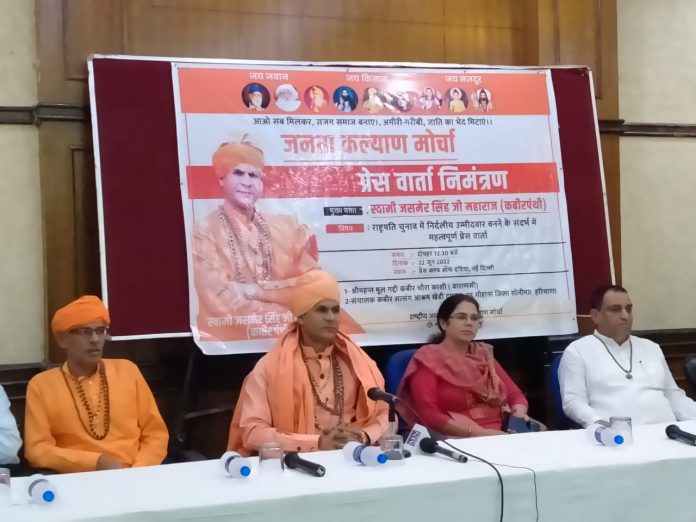 New Delhi: Janata Kalyan Morcha President and (Kabir Panthi) Swami Jasmer Singh Ji Maharaj has decided to contest the presidential election as an independent candidate. Swamiji is also the mahant of Kabir Chauda Kashi Mool Gaddi of Varanasi and the director of Kabir Satsang Ashram at Khedi Damkan in Sonepat.

In a press conference held today to announce his nomination for the Presidential candidate, (Kabir Panthi) Swami Jasmer Singh Ji Maharaj said that always politicians have been given priority for the presidential election, but if people associated with spirituality and culture participate, our nation will be more stronger and prosperous.

He said that he wants to field as a deserving candidate for the presidential election, but at least 50 votes will be needed for that.

(Kabir Panthi) Swami Jasmer Singh Ji Maharaj said that he belonged to the Kabir Panth who believes in equality. “If a person from such cult and ideology of Kabir Panthi will be chosen as the protector of the nation as the president of India, the nation will progress and prosper “, he said.

He appealed to the youth of the nation and the leaders across the party that a spiritual guru should be given the chance to serve the country.

Swami Jasmer Singh Ji Maharaj will talk to the leaders of all parties and the independent MPs after the nomination is filed.