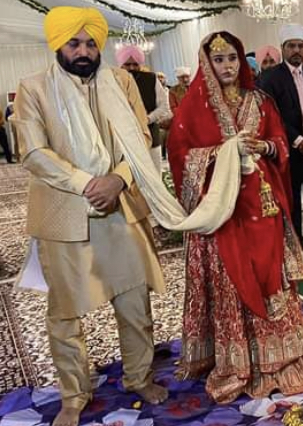 New Delhi/Chandigarh: The CM of Punjab, Bhagwant Mann tied the knot with Dr. Gurpreet Kaur on Thursday. This marriage took place in the CM residence according to Sikh customs. The Aam Admi Party MP Raghav Chadha and the CM of Delhi Arvind Kejriwal were also presented at the wedding. Kejriwal performed rituals like a father in Man’s marriage. Together with Mann and Gurpreet’s family, Kejriwal’s family also attended the wedding. Raghav Chadha werr arrived at the wedding ceremony with his mother.

Mann’s had argued in this application that he is getting divorced from his wife due to politics as his wife had alleged not to spend sufficient time for family. She didn’t want that Mann should have career as a politician.