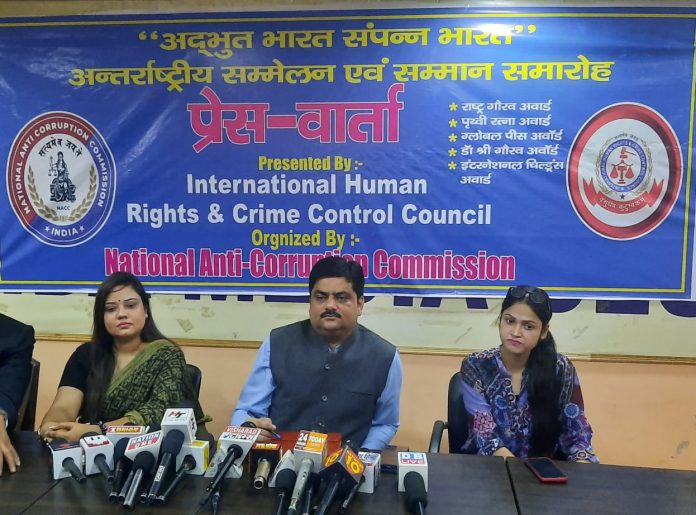 In a Press conference held at Noida Press Club, IHRCCC Chief Dr. VP Singh told that an international conference is going to be held in Goa on January 21, 2023. It has been decided to organize the International Conference “Adbhut Bharat Sampanna Bharat” by “National Anti Corruption Commission” and International Human Rights and Crime Control Council in Goa in which national & international awards will also be given. In which Rashtra Gaurav Samman, Dr. Shri Gaurav Samman, Prithvi Ratna Award, Global Peace Award, International Children’s Award will be presented to eminent personalities of the country and abroad. Rashtra Gaurav Samman is the highest civilian honor given by the “National Anti Corruption Commission”. This award is given for different service to the nation like education, health, social service, journalism, environmental arts, literature, science, administrative service, public service and sports. The International Conference has been organized on 31 December 2022 in Delhi, 21 January 2023 in Goa and 21 August 2023 in Bangkok Thailand.

Dr VP Singh said that children are the future of the country, who should have a leading role in nation building, so their right guidance is necessary. The organization’s Vice President Akanksha Vidyarthi said that our aim is to give the right direction to the society and build a new nation. The President of the organization, Dr. Harish Makhija said that our effort should be that all the people should be connected with the main stream of social development; only then the country will develop.

The Director of the organization Saurabh Sachan & Priyanka Sharma, Deputy Director Deepak Kumar, Rohit Kumar, Roshni Singh and Manager Ghanshyam Yadav told that we need to bring social harmony in the society. The institute is running various types of awareness programs in the country and abroad.

This organization is doing a lot of public welfare work in various areas of India for human welfare since 2013, which is playing its leading role in nature conservation as well as making human and animal friendly social harmony a part of the society. Dr VP Singh said that we are moving ahead at the pace of a turtle, connecting the society with our members and one day we will be able to curb corruption, crime and surely India will again become the world master and gold bird. Iltaja Usmani, the PR manager of the organization, emphasized on human unity and he said that there is no religion bigger than human religion.