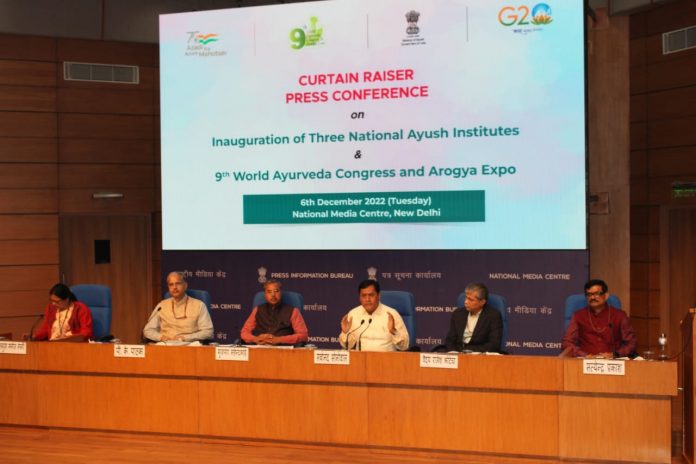 Highlighting the importance of the spread of Ayurvedic Education and the potential of traditional medicine in boosting the health tourism of India, Union Minister of Ayush, Shri Sarbananda Sonowal in a media briefing on Tuesday informed that Prime Minister Narendra Modi will be inaugurating All India Institute of Ayurveda at Goa which is a Satellite Center of All India Institute of Ayurveda, New Delhi on 11 December 2022. The Union Minister added that the satellite center would not only help in expanding the reach of world-class education in Ayurveda but also play an important role in boosting medical tourism in India.
“The Ayush branch of traditional medicine has made its mark at a global level and this has been possible because of the exemplary steps taken by Honorable Prime Minister Narendra Modi, who gave more power to Ayush, by establishing it as a separate Ministry and has motivated us to expand the pastures of traditional medicine”, the Union Minister added.
Minister of State, Ministry of Ayush Dr. Munjapara Mahendrabhai along with Secretary, Ministry of Ayush, Vaidya Rajesh Kotecha, Director of All India Institute of Ayurveda, Professor Tanuja M Nesari and other officials of Ministry of Ayush were present on this occasion.Apart from focusing on the best preventive healthcare facilities, the Goa-based satellite centre boasts of the best latest biomedical tools and machinery for diagnosis.
The All India Institute of Ayurveda, New Delhi has already made its mark in the form of a tertiary care centre that played an important role by benefitting as many as 15 lakh patients during the last five years. The Centre in New Delhi provides for treatment in 36 specialty areas including panchakarma, diet, lifestyle, yoga, diagnostic technology etc. that are amalgamated with ultra-modern diagnostic technologies including an ICU.
In the last five years, the institute has enrolled as many as 350 students into MD and 85 PhD scholars in 12 specialties.
The institute has also created milestones in the field of translational research by bringing out about 1500 publications. Apart from this, the institute has signed about 50 Memorandum of Understanding with various institutes. Out of them 15 are from international institutions of global repute including London School of Hygiene and Tropical Medicine (London), Western Sydney University (Australia), and the National Institute of Advanced Industrial Science and Technology, Japan to foster the collaboration traditional medicines with latest technologies.
The Institute also achieved a milestone in providing exemplary services during the unprecedented covid times. The institute provided secured the health of 80,000 Delhi police personnel through specially designed AYURRAKSHA Kits. The outcomes of which are published in the journal of Frontiers of Public Health.