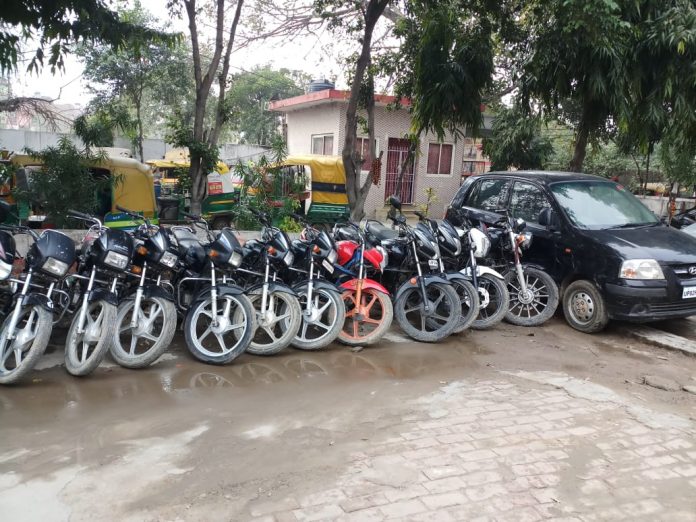 Ghaziabad: A interstate gang of vehicles thieves defaced and Police Vijay Nagar police arrested 6 accused of vehicle stealing and large numbers of stolen bikes recovered with one car from their possession.
PS Vijay Nagar had input about some suspect person who were doing bike stealing incident and touched with interstate vehicles thieves gang. Shyamveer Singh Station Officer vijay nagar made a team and started checking at DPS Chauraha where police saw a suspicious moving a car which was stopped and checked where  Six person were in the car who couldn’t replied proper way when police questioned with them. police smell some suspicious thing and started serious inquiry where all six  people told   that they have some bikes that have been stolen and Which he has kept hidden by the side of Hindon areas as per information given by them police recovered 27 bikes from said location by them.
Police arrested namely Upendra, Rinku, Vipin, Jasrath, Bachhu and Sunil and claimed to all six had contacts with interstate vehicles thieves gang.

Shlok Kumar SP City Ghaziabad said, ” All six accused arrested by vijay nagar police during checking and recovered 27 bikes and a car from their possession they used to stealing vehicles from NCRs Markets by duplicate keys and sale it in local markets”