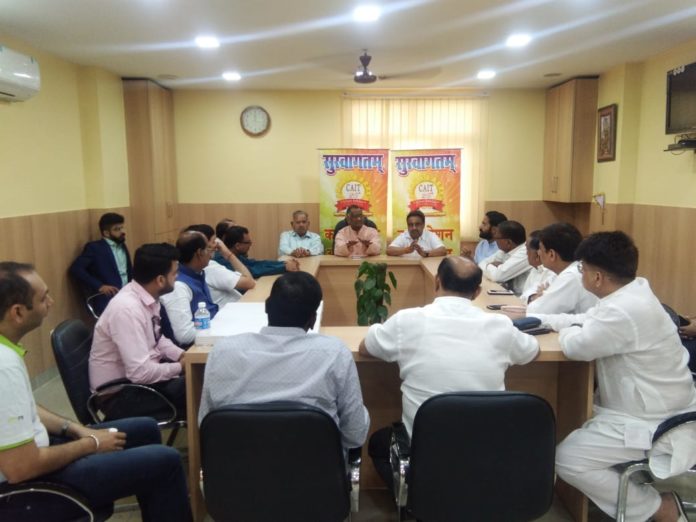 New Delhi: The Confederation of All India Traders (CAIT), apex body of business community representing 7 crore traders through more than 40 thousand trade associations and federations across the Country after closely analysing the election manifesto of political parties and keeping in view of better future of the Country has taken a decision to support BJP & NDA allies in Loksabha elections. After this mandate of CAIT, about 7 crore traders all over the Country are expected to vote BJP & NDA allies as a vote bank. The message of CAIT will be percolated down the line through thousands of trade associations all over the Country to traders. On the other hand under “whisper campaign’ of CAIT the traders will urge their customers also to vote & support BJP in polls. Beside more than 30 crore employees working in business community will also be encouraged to vote & support BJP. There are about 195 Loksabha seats where traders are in dominance and their voting pattern will decide the results of the polls in such constituencies.

CAIT National President Mr. B.C.Bhartia & Secretary General Mr. Praveen Khandelwal informed that this decision has been after consulting prominent trade leaders of the different states of the Country and analysing the political situation & future of the Country at a meeting of trade leaders held at New Delhi. The meeting also considered the feedback received from traders across Country.The CAIT is engaged in gigantic task to ensure decisive and prominent role of traders in Loksabha polls.

In current political situation on the one hand there is PM Modi led NDA which is contesting elections as one unit espousing strengthening of the nation and aiming to take economy first among equals in the world whereas on the other hand there is a Mahagadthbandhan of various parties, the allies of which are contesting elections against each other in various states and as such not capable to give a strong and stable Government in the Country.

Mr. Bhartia & Mr. Khandelwal said that today the Country needs a leaders who is visionary, committed to take decisions and eager to take India shining at the global platform. The decisions taken may not be politically beneficial but remains in larger interest of the nation. In last 5 years we have seen Mr. Narendra Modi taking such decisions including GST & Demonetisation which could have been politically not fit for BJP but PM Modi remained firm and at the same time amended the decisions several times on the demand of traders and other sections of the people. There is an urgent need to eradicate rampant corruption and Inspector Raj as also reining the Red-tapism of bureaucracy and under the circumstances Mr.Modi is the only capable leader.

The CAIT has studied comparatively election manifesto of both BJP & Congress and BJP has given much prominence and priority to traders by including some of the fundamental core issues in its manifesto including a National Traders Welfare Board, National Policy for Retail Trade, Pension to traders attaining the age of 60 years, Accidental Insurance of Rs.10 lakh to traders registered under GST, Merchant Credit Card on the pattern of Kisan Credit Card, Loans upto Rs. 50 lakhs without any collateral security. The implementation of all these issues will certainly develop internal trade of the Country and will make available various new business opportunities to traders and growth in employment.

Both Mr. Bhartia & Mr. Khandelwal informed that after this decision of CAIT, the traders across the Country will engage themselves in making Mr. Modil led NDA victorious and will play an important role in bringing a positive political atmosphere in favour of BJP. The trade associations across the Country will hold meetings of traders in large numbers in commercial markets and will promote traders to vote & support BJP and its allies in Loksabha polls.