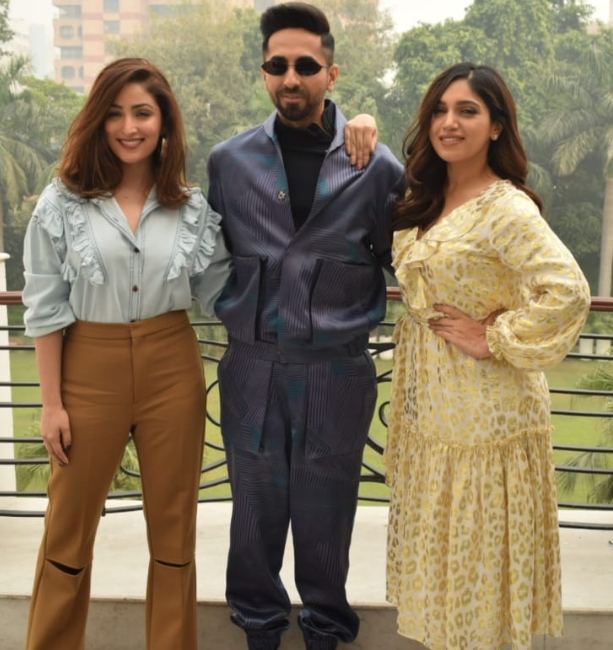 New Delhi: Bala Movie Starcast – Ayushman Khurrana, Bhumi Pednekar, and Yami Gautam spotted in Delhi for the promotions of the movie. The press conference was held at The Imperial Hotel, New Delhi. The movie will be released on 8 November 2019.

Bala is a satirical comedy film directed by Amar Kaushik and produced by Dinesh Vijan. Ayushmann Khurrana stars as Bala, a man living in Kanpur who is suffering from alopecia, and the story is about his lack of confidence and the societal pressure that comes with balding. Bhumi Pednekar, Yami Gautam, Javed Jaffrey and Saurabh Shukla feature in supporting role.

Present at the Conference, Ayushmann said, “It took me 2.5 hours to get ready every day and I felt very different, it took me about 4-5 days to realize it’s actually me. And the second thing is that it takes empathy to do every character.

Bhumi talking about her character said, “Nikita has prepared herself well because from her childhood she has heard taunts and comments about her color. She is on a trip to change the way people think.” she also added, ” Even in my personal life, I have friends who have been through this discrimination and faced many problems in their life because of their skin color.”

Yami shared about her role in the movie, ” I am playing the role of a girl from a small town named pari who lives in her own world and is a tik tok star. She finds herself very beautiful and she doesn’t think of herself less than a pari but she also tries to break the norm society has set about physical beauty.