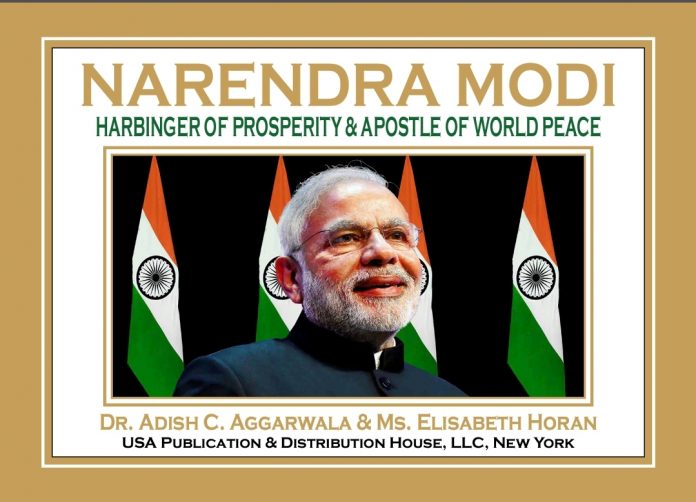 New Delhi, 03 April 2020: The world’s biggest biography release has been postponed due to Coronavirus. The author of the biography written on the Prime Minister of India, Shri Narendra Modi,  titled “Narendra Modi-Harbinger of Prosperity and Apostle of World Peace” is Dr. Adish C. Agrawala, President of the International Council of Jurist, London, and Miss Elizabeth Horan, a well-known American writer.

According to Dr. Adish C. Agrawala, as a result of an American writer and publication, this book was decided to be released in the US by US President Donald Trump, which has been postponed due to Corona.

Printed on a specially sized paper made in Japan, this book is published by USA Publication and Distribution House, New York. Originally written in English, the book has also been translated into foreign languages such as Arabic, Dutch, French, English, German, Italian, Japanese, Mandarin, Russian and Spanish and ten Indian languages.

Throwing light on the routine and lifestyle of Prime Minister Narendra Modi in the book, it is said that the reason for his strong will power and indomitable courage is his lifestyle like yoga-pranayama practice, moderate life, balanced diet, and spiritual practice.

According to the book, looking at Narendra Modi’s routine, he seems to be a true karma yogi. He wakes up early and practices yoga, pranayama, and meditation regularly.  Then a cup of ginger tea and reading newspapers. After that lightly boiled or roasted breakfast reaches the Prime Minister’s office at exactly 9 o’clock. Lunch and dinner are also mild and satvic. After that, while working late, he sleeps around 1 pm. He sleeps only about three and a half hours.

In the month of Chaitra, Narendra Modi observes the full fast of Navratri every year. This gives them spiritual power which helps in making big decisions. The importance of this book increases because of the increasing popularity of Modi globally. It is the magic of Narendra Modi’s worldwide popularity that despite his recent preparations for the upcoming elections, US President Donald Trump made a significant tour of India, including his family, only at the invitation of Prime Minister Modi.

Many important personalities of the country have also expressed their views about the personality and leadership of Prime Minister Narendra Modi in the book.

Defense Minister Shri Rajnath Singh says that “Prime Minister Narendra Modi has given India the best leadership on the globe. He is a leader of determination and determination.”

Road Transport Minister Nitin Gadkari says “Our Prime Minister is the messiah of change. Under his rule, the poor have got basic amenities and entrepreneurs have the convenience of business”.

Spiritual guru Sri Sri Ravi Shankar has stated in his foreword that “It is a challenging task to lead a diverse country like India in an economic environment full of corruption, selfishness, odd politics and difficulties”.

Uttar Pradesh Chief Minister Yogi Adityanath has said in his foreword in the book that “India is achieving many achievements under the leadership of Prime Minister Narendra Modi. The various steps taken by him have boosted both agriculture and industry”.

Karnataka Chief Minister Yedurappa said that “Modi is more popular than the Prime Minister in general due to his personality. His diligent work style inspires people to work harder”.

Haryana Chief Minister Manoharlal Khattar spoke of the “cleanliness drive” and many visible changes in the country under the leadership of Modi.

Indresh Kumar, a member of the central executive of the RSS, said that “Modi has restored ancient Indian traditions and values around the world. Yoga practice is the perfect proof of which yoga has spread worldwide.”

Chief Minister of Gujarat, Mr. Vijay Rupani, says that “Even though Modi Ji’s entry into politics was very late, his knowledge, special experience, and foresight tied the whole country into one thread and led India to become a world guru again.

Union Information and Broadcasting Minister Prakash Javedkar say that Modi ensured the integrity of India by removing Article 370 and establishing the importance of the Indian Constitution.

Union Human Resource Development Minister Ramesh Pokhriyal Nishank said that Prime Minister Modi not only tried to give a new direction to the country by running a cleanliness drive but also started the Ujjwala scheme, affordable generic medicines, public insurance, free medical treatment and made a new beginning towards providing relief to the common people of the country.

According to Assam Chief Minister Sarbananda Sonowal, “Narendra Modi Ji’s continuous efforts have brought more change and results to the country and it has come out widely for peace and prosperity.”