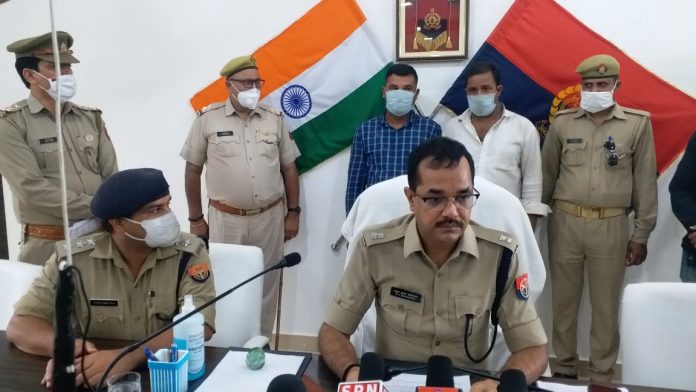 Bulandshahr: In a joint operation by PS Sikandrabad Gulaoti police station team arrested 2 accused who were used to cut ATM Machine and steal money from Machines.
Police seized 1 car, illegal weapons and cash 60K rupees from their possession.
By given instructions from SSP, a joint operation was carried out in which PS Gulaoti and Sikandrabad team took serious action and started checking in on road. SHO Gulaoti Sachin Malik had input that may loot in ATM machine entire areas. In near about 11:30 pm
During checking police saw a moving car from front side. Police alarmed to  stop that car but and finally car was stopped and two accused namely Jabeer and Naseer were arrested.
According to Atul Srivastava, SP City,” Two accused Jabeer and Naseer have been arrested and two other got success in fled away from spot. we are trying to catch them. Arrested accused were involved in stealing money from ATM machine. They first used to searched ATM machine in alone place and after find out they used to cut that machin by  cutter and other instrument and used to steal money from Cutted ATM machine. In night before arresting they may be steal punjab national bank ATM.”
Further investigation is carrying on said SP City.