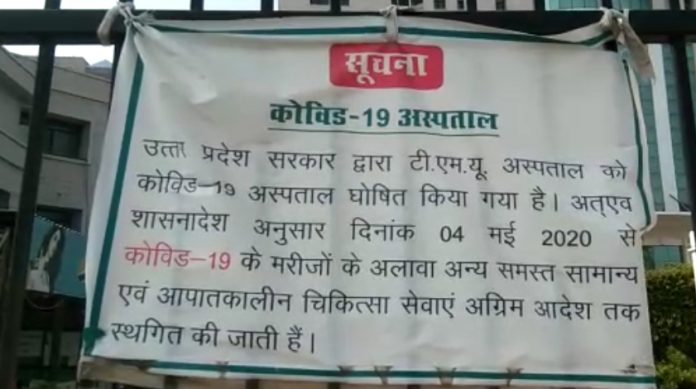 Moradabad : A corona-infected woman admitted late night at TMU Covid 19 Hospital, Moradabad Delhi Highway 24, died this morning after falling from the second floor of the hospital, the entire incident has been captured in the CCTV located there.

This incident took place around eight o’clock this morning, when a woman fell from the second floor in an attempt to flee out the window in the rear of the hospital building, causing panic in the hospital administration, the woman  Kavita is originally identified as a resident of Bilari region who was hospitalized late last night after being corona infected, yet no official has anything to explain the exact cause of the woman’s fall or jump.  Unable to tell, the police body has been taken into possession and sent for postmortem, although Moradabad SP Traffic has definitely told about the incident.

According to Ashok Kumar (SP Traffic) Moradabad,
“A Corona positive lady namely Kavita resident of Bilari, died by jumping form TMU hospital. Body has been sent for post Morten and further investigation is carry on.”