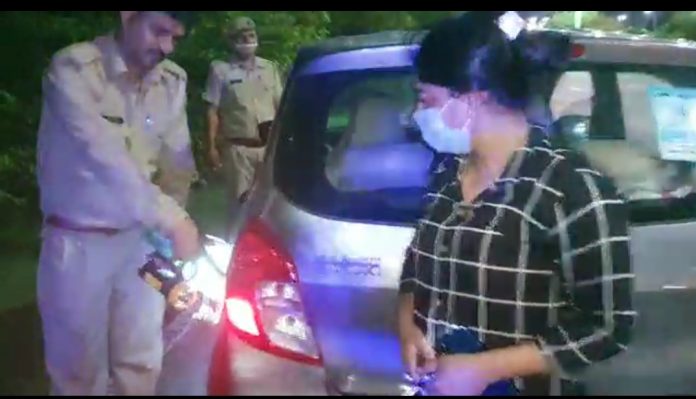 Gautam Budh Nagar : Today, at around 8:00 pm on 24 August 2020, on expressway which connects Delhi to Greater Noida on which G B Nagar Police Commissioner Alok Singh was moving saw a car parked in a secluded place directed the driver to stop his vehicle and he found a woman was sitting alone inside the car. The woman was looking very upset.

She was asked by the police personnel with the Police Commissioner, why she was sitting alone inside  this car that too alone at this secluded place? In the reply, the woman informed the police personnel, “I am Dr Anjali and am working at Sharda Hospital. I was going back to my home but Infact, my car ran out of petrol, which I suddenly noticed. I had called 112 they responded me back and I have been informed that they are carrying petrol and are likely to come any moment. As my car is at deserted place so I am little bit nervous due to my safety being a women.”

On hearing the fact, police Commissioner Alok Singh summoned nearest police patrolling party. In response to the call the Varun Panwar, SO Knowledge Park immediately rushed and reached the spot. Alok Singh, the police Commissioner instruted him to stay there near the car untill police team arrives and bring the petrol for the car.

When the police brought petrol and filled the car of the said doctor, she left the place happily.