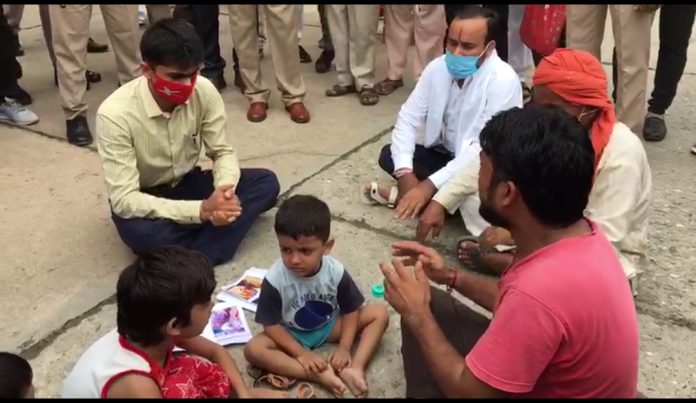 Noida: In order to get his plot free from domineering, a man sat on a dharna outside the DM office with his family.
Seeing the person sitting on a dharna, the District Magistrate of Gautam Budh Nagar went near the person and listened while sitting on the ground.
You can see the pictures on the dharna sitting with the children outside the District Magistrate Office, the victim has been helpless, so now he is sitting on the dharna and is talking about putting kerosene and the victim says that his  The land was in Mubarakpur village in Surajpur area, but some overbearing people wanted to capture it and also beat up the family. The victim complained to the police that all the big officers kept wandering to them but no officer told them that one  Did not listen
When Noida DM Suhas LY, the officer sitting inside the office came to know about this, he himself came out and where the victim sat on the dharna, while he himself is said to sit on the ground and assure them of the action, the DM said that the victim  Took a complaint letter from and handed over the investigation to the SDM and ordered action but after all the question is why the ruling officers hide from taking action and why people have to wander from time to time to get them done.