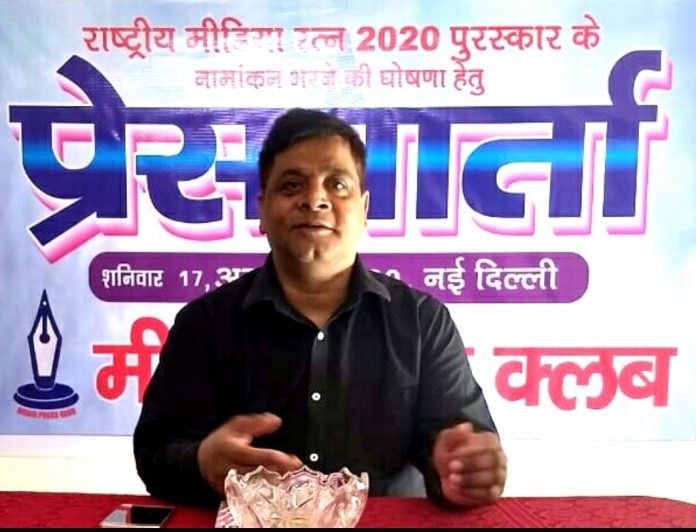 New Delhi: Rastriy Media Ratna 2020 award, given by the Media Press Club, was announced by Media Press Club General Secretary Mohammad Joshi at the press conference. Addressing the journalists rastriy Media Ratna 2020 Award is an award given by media person. The award has been given every year by the Media Press Club in a grand founction. Any media person who gives all possible support to media personnel often Due to which media person are easily able to do their work, the name can be nominated for this award. You can send the enrollment by going to this link https://form.jotform.com/202821871204448 or by calling the link from WhatsApp at 880-381-8844. The last date for enrollment is 30th  November 2020.
Mohammad Joshi further said that by making a list of all the names received by the last date, they will make the names of the media club members and other media personnel available to vote. All the members, including the media personnel, will send the 40 names of their choice to the list of those names by 15th  December 2020. The names of the 40 greatest personalities who will get the most votes will be announced for the Rastriy Media Ratna 2020 Award on 1st  January  2021.

While answering this question of journalists who will be the chief guest for distribution of Rastriy Media Ratna 2020 award, Mohammad Joshi said Rastriy  Media Ratna 2020 Award will be the same as the old hypothesis Because media press club believes The award should always be given by those hands which have more influence in our society. Only our Sadhu-Sant, Dharmik Guru, etc. come in it So how can anyone be more for any beautiful honor. This time too, the award organizing committee is discussing in the name of Sadhu-Sant, Religious Guru, etc. as well as a famous singer and christening media personnel for award distribution. These names will also be announced very soon.