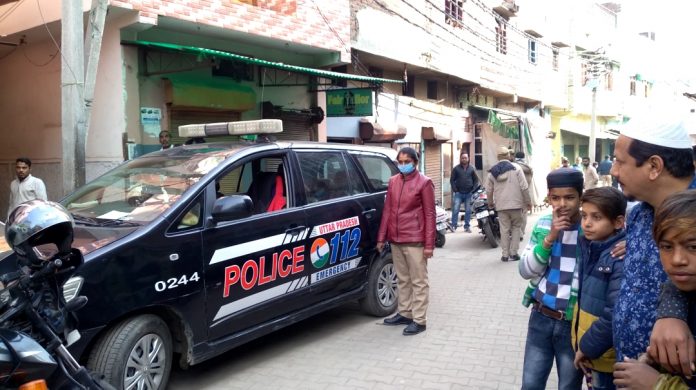 Moradabad: In the Civil Lines Police Station area of ​​the Moradabad, on Tuesday, some people entered in the house of a brass businessman in broad daylight.  The miscreants took hostage and looted.  The police has started investigating of this case.

In the civil lines police station area, on Tuesday, a rogue armed with knife and gunman entered the house of a brass trader.  The miscreants robbed the woman and her children by taking them hostage.

Zulfikars residing in street number eight of Civil Line Police Station work in brass smelting.  His factory is in street number 13 near Ramganga edge near the house.  According to Zulfiqar, at about six o’clock in the morning on Tuesday, he went his factory from the house.  While his wife and four children were at home.  At around 12:15 pm Zulfiqar’s elder son Sahan went to tuition.  During this time the wife and two young children were present at the house.  While leaving the house, Sahan had left the main door open only when two masked three miscreants armed with guns and knives entered the house.  Putting the pistol, they started to open the lock of the iron cupboard lying next to it.  When the woman protested, she stabbed her neck with a sharp knife.  The woman was frightened by the sharp attitude of the miscreants.  The miscreants looted 1,55,000 cash woman’s earrings and anklets from an iron cupboard.  Before escaping, the miscreants locked the woman and her two children in the room.  About 15 minutes later, Hina’s younger son returned home from Tuition.  Seeing the mother and siblings locked in the room, the child opened the door.  The woman then exited the room.  The woman reported the first husband to the house robbery.  Zulfikar returned home shortly.  He called UP 112.  Reported robbery in the house in broad daylight.  CCTV cameras installed around the brass businessman’s house are being searched.  The police do not currently have any concrete information regarding the miscreants.  Civil line station in-charge and trainee CO Darvesh Kumar said that the police is investigating the incident.  Efforts are being made to identify and apprehend the miscreants.