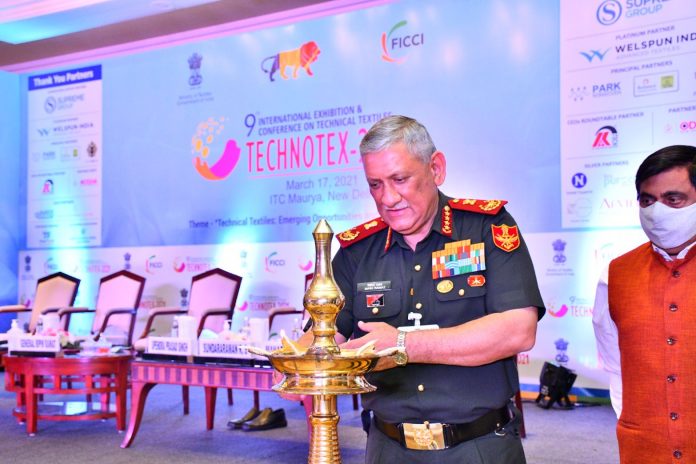 Addressing the 9th edition of TECHNOTEX 2021 organized by FICCI, General Rawat said that we (Govt of India) will not hesitate to put the entire technical clothing requirement of the armed forces on the negative import list. “Defense services have a huge stake in technical textiles. We are one of the largest users of techno textiles that use technology, and we will continue to use them in the years ahead,” General Rawat said.

He further mentioned that techno textile entrepreneurs and those already in this field will help us with the kind of textiles we are looking at. “Our jawans are operating in extreme temperatures and we are looking for kind of clothing that can sustain them in such climate,” he added.

Gen Rawat further stated that a large amount of defence technical clothing is being imported but there have also been major innovations within the Indian industry in the past few years. “We have now started placing orders for such clothing,” he said.

General Rawat further stated that the armed forces is also considering clothing for special marking or technology that can help us identify friends from foe. He mentioned that armed forces also use lot of fibre material for different purposes like insulation, covering, lining, etc., which must be waterproof, long lasting and possess elasticity. He also identified upcoming areas that would require special, like technical clothing for space missions, stealth technology-based clothing for special forces, special dressing bandages for medical purposes, insect, and mosquito repellent clothing as an emerging area of interest for armed forces.

Mr Mekapati Goutham Reddy, Minister of Industries, Commerce, Information Technology and Skill Development, Govt of Andhra Pradesh, said that the success of this sector is not just determined by the annual growth, scale of production and volume of trade, but it will be remembered with its impact on livelihoods secured, technology infused, and innovations done to minimize the dependency and maximize self-sustenance. The state of Andhra Pradesh, he said, truly believes in the power of human capital and has established new centres and skilled colleges across state so that quality skill is accessible to all.

“To achieve USD 5 trillion economy, special emphasis is needed on techno textile and manmade fibre,” Mr Reddy said. We as a nation need to look as reskilling and upskilling and there is a huge opportunity for us to scale at the global level, he added.

He further mentioned that innovation is also disrupting the industry and compelling the fashion stalwarts to be sustainable. “The sector is transforming with the penetration of AI, upsurge in ecommerce,” he added.

Odisha, he said, was ranked number one in terms of attracting investments during Apr-Sep 2019. Even during the pandemic, the investor sentiment towards Odisha has been extremely encouraging and the state has been able to attract new investment of over one lakh crores across multiple sectors, he said.

“The Industrial Policy of the state recognizes Apparel and Textiles, including Technical Textiles as one of the five focus sectors and a number of attractive fiscal and non-fiscal incentives for the promotion and development of the sector have been laid out,” he said.

He further mentioned that special emphasis is being provided by the State Government for the development of the Technical Textile Park by providing the right mix of industrial infrastructure and fiscal incentives. The park is being developed over an area of 100 acres and will be anchored by a 300 KTPA capacity polyester plant by Indian Oil Corporation (IOCL). The plant will have a committed feedstock of Polyester Staple Fibre (PSF), Drawn Texturized Yarn (DTY) and Fully Drawn Yarn (FDY).  “This will create a unique ecosystem for the growth of technical textiles sector not just in India but in the entire South Asia” said the Minister.

Mr Upendra Prasad Singh, Secretary, Ministry of Textiles, Government of India, said, “Technical textile has many applications. It is a versatile sector with a high manoeuvrability and with the potential to replace many products. The government has set up technical textile mission and scrutiny of 15 – 20 R&D projects are also underway. In PLI, he said we have included the man-made fibre and technical textile. He further said that government, researchers, and industry must come together to explore many more opportunities in the technical textile. “Technical textile will be very much useful in defence and will go in a long way in making India Atmanirbhar,” the Minister added.

Mr Mohan Kavrie, Chairman ,FICCI- Technotex SME Committee said we are walking on the path of becoming Atmanirbhar and this is possible because of our Atmavishwas. He further said that the technical textile industry is receiving immense support from the government and urged the audience to visit the stalls virtually.