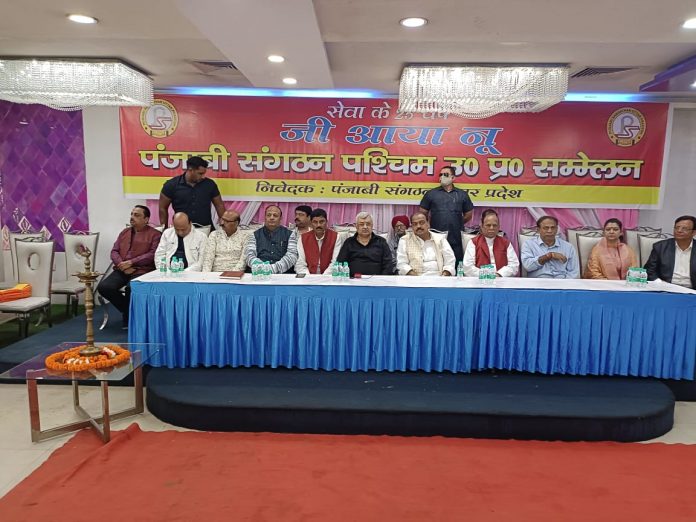 @ Spl Correspondent
Ghaziabad: Under the aegis of Punjabi Organization Uttar Pradesh, as per the instructions of the State President Shri Ramesh Dhingra, today an important meeting of Western Uttar Pradesh Punjabi Organization was held at Ghaziabad, State President Ramesh Dhingra said that Punjabi is not weak anymore Today, Punjabi is getting organized in the state and soon its echo will be heard everywhere in the state, on this occasion representatives of 25 districts of western Uttar Pradesh were present to send the message of the state president to the entire state. The units were ready for a big announcement, from Ghaziabad, Ashok Monga, Sunil Miglani, Kamal Sekhri, Malkit Singh Jassar were made the patrons of the organization. Ajay Kalra was nominated as the President of West Uttar Pradesh, which he gladly accepted for service. And Bindu Arora also thrilled the auditorium with his humour, Niti ji from Bulandshahr and Manmohan ji from Khurja took the oath of service to the organization, Muzaffarnagar Rajiv Grover and Vijay Verma ji took the task of taking the achievements of the organization to the people. Manoj Arora ji and Pinka ji, who came from Bareilly, assured all the members of the state that they would give their services to the organization 24 hours a day. Keeping emphasis on political participation, Satish Arora ji, who came from Chandausi, first of all stressed on improving himself.