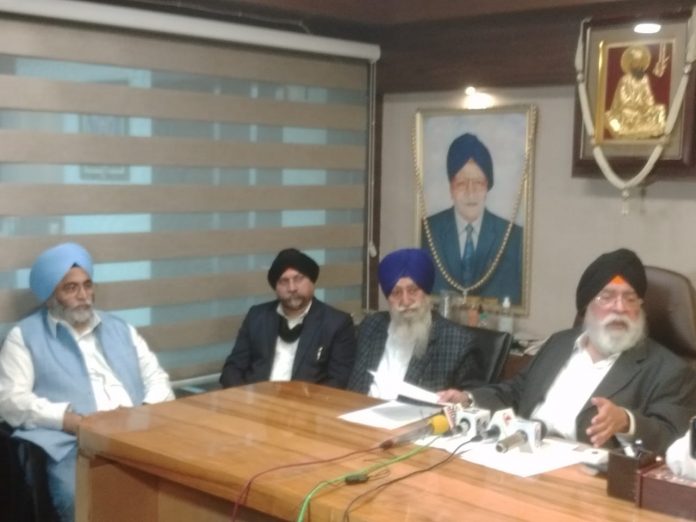 NEW DELHI – The SADD demanded an explanation from the Badals for appointing the president of the Sikh Forum as the DSGMC auditor , especially when the appointee himself had maintained intriguing silence as the committee’s chartered accountant as funds were embezzled brazenly from the gurdwara treasury . SADD secretary – general Harvinder Singh Sarna released a letter he wrote to Sikh Forum president Ravinder Singh Ahuja recently , asking him to disclose the Deloitte and internal audit reports of the DSGMC books , which never saw the light of day . ” We just couldn’t fathom that gurdwara books were doctored , donated funds and medical equipment siphoned off , and salary bills of the GHPS staff were left to mount under your watch , ” the Feb 9 letter addressed to Ahuja read . ” We just couldn’t fathom that how police could build a case of forgery against ( MS ) Sirsa when a seasoned chartered accountant like yourself could very well have nipped his corrupt activities in the bud while auditing DSGMC accounts . ” Sarna wondered why and how Ahuja became party to blocking the public release of the Deloitte audit report of the DSGMC accounts . ” Me and my party , on behalf of Guru ki Sangat , therefore , request you to immediately set the record straight by releasing all internal audits , your own accounting reports and the Deloitte findings in the Sangat’s domain , ” Sarna wrote to Ahuja . The Panthak leader regretted that the president of the Sikh Forum , who sits on the legacy of someone like Lt – Gen Jagjit Singh Aurora , was seen rubbing shoulders with the likes of Tarlochan Singh . ” Ahuja , Tarlochan Singh and several other Page 3 Sikh elitists in New Delhi are unfortunately worshipers of the rising son , ” Sarna observed . ” They are worshipers of the rising son because that’s where they get their booty from . ” Asked to explain , the SADD leader told reporters to investigate how Tarlochan Singh’s son takes as high as Rs 8 lakh a month from the DSGMC for running an MRI facility at Sri Bangla Sahib . ” As chairman of the Khalsa College , Tarlochan Singh took a car , a driver and a number of other facilities billed to the gurdwara treasury . He would buy goggles and bill them to the DSGMC . What was Ahuja doing about those bills ? What was his responsibility not just as a CA but also as a Sikh looking after gurdwara books ? ” Sarna sought immediate disclosure of all audit reports that Ahuja presided over as CA of the DSGMC . He also demanded the Badals release a white paper on the need to appoint him as auditor of the gurdwara accounts in New Delhi .