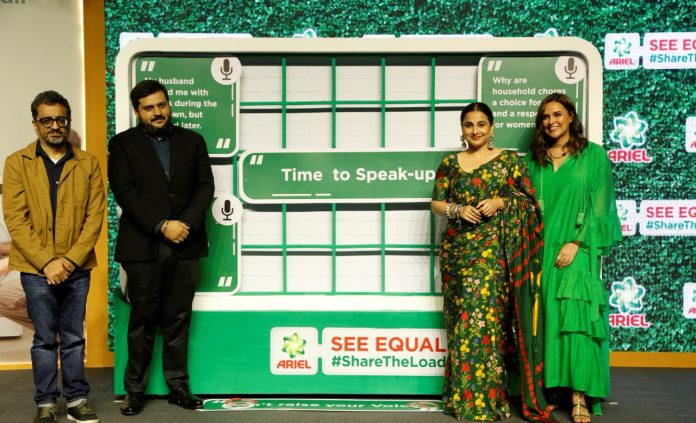 New Delhi– Ariel India has been advocating for gender equality at home for seven years, through its award-winning movement #ShareTheLoad. Their latest edition #SeeEqual has received a phenomenal response from all quarters and has gained momentum. The film has got everyone thinking – “If men can share the load equally with other men, why not with their wives?”. The protagonist in the film represents the mood of many women today, where they are impatient at the pace of change, and therefore are demanding to be seen as equals with a direct question – Do you see me as your Equal? Because we know that when we #SeeEqual, we #ShareTheLoad equally.

In the city today, an exciting panel comprising of notable Bollywood actress Vidya Balan, Director Shimit Amin – who has also directed many #ShareTheLoad films, and Sharat Verma – Chief Marketing Officer, P&G India, and Vice President, Fabric Care, P&G India came together. The panel was moderated by Neha Dhupia- anchor, actor and mother who truly imbibes the values of sharing the load. The panel highlighted how now is the time for women to speak up against the inequalities they face, so that they can demand to be seen as equals. The panel also discussed how the imagery around us in media can help to break long standing conditioning and biases, to pave the way for an equal tomorrow. At the event, Ariel also urged everyone to do their bit in creating stories, imagery and characters for women that go beyond the stereotypical gendered modules, and feature them in authentic, progressive and equal depictions.

The panel also uncovered some hard-hitting facts on household inequality in Delhi. 78%* men agreed that they did their share of household chores when they were staying with other men or roommates. 96%* men believe that sharing the load equally will benefit their relationship with their partners. So, if men know that sharing the load can help their relationship, and they have taken responsibility for chores in the past, what stops them from doing this as partners? The reason for this could be many but it was alarming to find that 80% women believe their partners know how to do household tasks but choose not to do them. This ‘choice’ signaled a mindset issue arising from years of unconscious bias, and 82% women felt that men don’t see women as equal when it comes to housework. Therefore, by raising a pertinent question – “If men can share the load equally with other men, why are they not doing it with their wives?”, Ariel is reminding families, that true equality is only reflected when domestic chores are shared. Because when we SEE EQUAL, we SHARE THE LOAD!

Furthermore, 94% women in Delhi believe it is time to talk to men about doing their share of the household chores equally. This is representative of an underlying sentiment that while we have come a long way, change is not coming in fast enough. Therefore, Ariel India’s recent film exemplifies how a thought-provoking conversation can lead to more equality. The protagonist refuses to accept inequality in her marriage, and instead chooses to bring it up with her partner. Vidya Balan, Neha Dhupia as part of the panel discussion also spoke about personal anecdotes where they were able to challenge the status quo by speaking up. Conversations are great
Link to Ariel See Equal film- –

The vivacious Vidya Balan, who embodies a strong persona on and off screen said, “Ariel’s recent #SeeEqual to #ShareTheLoad film really resonated with me. Inequality runs so deep that most often we don’t even recognize it …In the film when the man tells the woman that he used to share the load with his male room mate in college, the penny drops for her and she expresses the unfairness in him not doing his bit at home ..and that in turn opens his eyes to the inherent inequality that we are perpetuating unknowingly….Equality in everything at home fosters stronger relationships between couples. The more conversations we have around it, the more examples we see around us of men and women taking up joint responsibility of household chores and everything else, the more chances of us reassessing our own biases and bringing in change. I am so glad to see a like-minded brand in Ariel who is continuing to advocate for domestic equality over the last 7 years and for keeping this conversation alive, and I am glad to join them today to help spread this message further.”

With Ariel #ShareTheLoad, we strive to trigger meaningful conversations that will help drive positive change. A recent World Economic Forum report claims that at the current pace of change, gender parity is still 135 years away. In fact, 79% women feel that between them and their spouse, they are often the ones who have to compromise. Such instances point at an underlying inequality in the relationship. This is leading to a growing sense of restlessness and impatience in women at the situation not changing fast enough. We believe that unconscious bias and conditioning is coming in the way of accelerating this social change. Ariel is therefore collaborating with like-minded partners to help spark meaningful conversations and correct the imagery, so that we can all be inspired by positive, progressive, and accurate portrayals of gender roles. Seeding imagery and stories of equality can set the right example in the real and virtual worlds, helping all of us to move to an equal tomorrow sooner than later,” said Sharat Verma, Chief Marketing Officer, P&G India, and Vice President, Fabric Care, P&G India.

Director Shimit Amin, of Chak De India fame and also the director of many #ShareTheLoad films including the latest one, ‘See Equal’ added, “I have been associated with Ariel #ShareTheLoad over the years, and the journey of their storytelling is reflective of the journey the society is taking. This year, while directing the film, we have tried to keep intact the sensitivity of the topic as well as bring to light the urgency to act by showing the woman speak up for herself and not waiting for change to happen at its own course. On the other hand, the film also depicts what men are capable of, and how it is that they are changing. While there are many men who have started to do more, a lot of them even take up their full share of responsibilities within the home and ShareTheLoad equally. It is important that we get these nuances and authenticity of depicting situations and characters right, because as storytellers, we have to be responsible. we know that the messages we put out have the power to change the social truth, and in partnership with Ariel, we are attempting to do the same,”
Supporting the #ShareTheLoad movement, Neha Dhupia said, “I have had a long association with Ariel and #ShareTheLoad over the years. I have seen the conversation evolve from ‘Laundry is not just a women’s job’ to ‘See Equal’ this year, which is also how society has progressed. I am so glad to see a woman speaking up for herself. This is a much-needed change. To break years of conditioning where women are supposed to be the primary caretaker of the house and the child, See Equal is progressive and heartwarming change. I am a mother who has continued to work through out and after my pregnancy, and I know that my equal relationship has had a huge role to play in this. Whether it is taking care of the kids, or keeping the house up and running, it is our combined responsibility – nothing is mine or his. Seeing such examples around can also be very empowering. The more imagery we see of a husband and wife taking up this responsibility together, the more it will get normalized, and we will move away from stereotypical gender roles. I am happy to partner with Ariel to take this conversation forward, so that we can all work towards a more equal tomorrow.”
The panelists also spoke about the importance of representation and imagery. For decades, Indian ads have shown women being custodians, managing homes, families, and children. As a result, it’s not surprising that even the most evolved men have taken a backseat when it comes to sharing responsibilities at home. Such mindsets can be fatal for the progressive growth of society, where men and women are not seen or treated equally within their own homes. Stereotypical imagery prevent society from being challenged to rethink their world views. While progressive, equal and authentic representation for women can help pave the way for more equality.