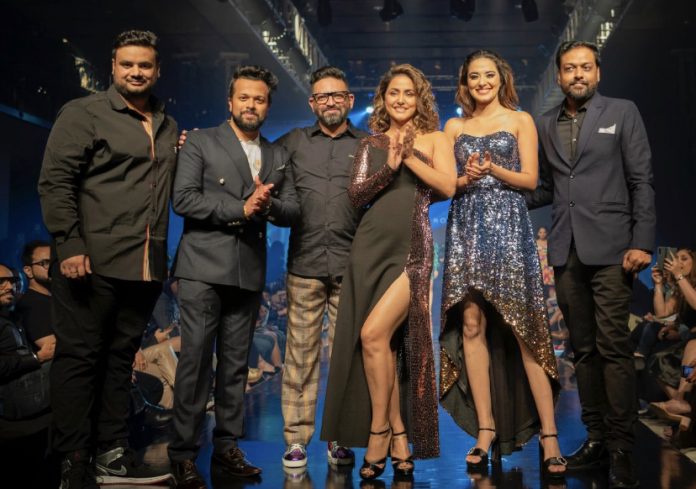 The third season of the action-packed India Designer Show, which featured spectacular collections from up-and-coming designers, was hosted in Delhi. The event was a massive hit, showcasing New Delhi’s luxurious lifestyle fashion. When numerous well-known celebrities, including Hina Khan, Kainat Arora, Stefy Patel, Shibani Kashyap, and hitha, graced the stage, splendor was at its height. The event was exceptionally well attended and was organised by the dream team i.e. Ronit Agarwal, Mohit Singh and Bibin Babu.

The primary goal of the annual India Designer Show, according to its founder and host Mr. Ronit Aggarwal, is to highlight and celebrate the true spirit of Indian designs, fashion, and innovation. What was extremely wonderful to see was that most designers used fabrics and styles that had indian origins, thus promoting the culture of the country.

The first highlight of this lovely day-to-night event was the amazing “NAZAR” khadi collection by designer Rosy Ahluwalia. She established the top semi-bridal khadi line in Delhi. Khadi, according to Rosy, is a crucial component of her creative side, which she wants to promote globally.

A young promising designer named Rinkuu Das presented her most stunning collection of Jute Embroidery on Handloom Chanderi after this opulent Indian touch of Khadi. Her brand OO’s was established in 2010 thanks to her persistent efforts and more than 11 years of experience.

Amit Bhardwaj presented the grand finale of the huge show with his brand-new Meami Fashion collection. Actresses Stefy Patel and Hina Khan performed the show’s opening and closing walks, respectively.Models and show stoppers wowed the audience with their vivid and colourful array of outfits.

Sanjay Mittal, took the stage in the second presentation of the show to deliver “Space Queens: A Secret History of the Stars.” Warq served as the inspiration for his line. Warq was previously solely used to decorate sweets, but today Mr Mittal started a new trend by applying Kailash Chand Warq to both human bodies and faces.

The co-host and co-founder Mr. BibinBabu remarked that these creations that the designers brought clearly show that Indians are extremely innovative and exceptionally talented in the field of fashion. With their able guidance India can be the next fashion hotspot.

Aditi Jain, a recipient of the Elite Event Award for excellence in couple-coordinated attire, then took the stage. In July 2021, she started the process of creating the stunning label “ADITI JAIN.” She never intended for this brand to be limited to the production of designer clothing, but rather to serve as a one-stop store for those interested in fashion..

A number of notable individuals, including businesspeople, industrialists, prominent bloggers, buying houses, diplomats and high commissioners from countries such as Italy, Argentina, Zimbabwe, Russia, South Africa, Turkey, and more visited the event.
Bollywood actress Hina Khan exclaimed that she has never seen a better organised event like India Designer Show with such gorgeous designs of clothing and jewellery, and that she was incredibly thrilled to be part of it.

A fantastic clothing line called “Wazir C” was launched by CHITVAN WAZIR. This company advocates for sustainable fashion and is committed to doing so. The first luxury clothing line of its kind in India, “Wazir C,” flawlessly combines Kashmiri art traditions with Western and Indo-Western clothing trends.

The creative Maninder Gulati then displayed a beautiful collection that was inspired by Journey of Flowers, Blissfully Blossoming during the Spring Season. With layers of emotions and moods, this new collection, “बहार” included intricate hand-crafted motifs that represented the blossoming flowers of the season.

After a lavish and mind-blowing collection display by the evening, a highly recognized name, FDDI, took the stage to present an exclusive variety of stylish LGAD show. Season 3 of India Designer Show included FDDI as a skill partner.

Dedicated to advancing and expanding the Footwear & Product, Leather Products, Retail and Fashion Merchandise, and Fashion Design sectors, FDDI is a leading academic and training organisation.

In the India Designer Show, 2022, every participating designer donned stunning jewellery from the collections by Shhriti Gupta Lath and New Light Jewellers.