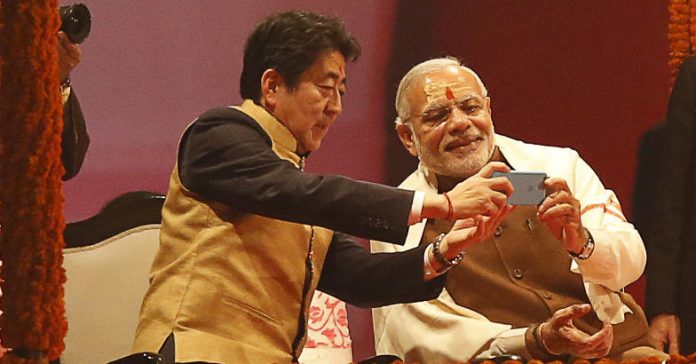 Former Japanese PM Abe was the pioneer of a new era in India-Japan relations. He did not visit India only to carry out talks between the governments of two countries. During this, he also used to go among the common people in an open car on the streets of Ahmedabad. During the Ganga Aarti in Varanasi, both the hands used to close their eyes and also displayed their special attachment with India. He also played an important role in the formation of the Quad (an alliance of America, Japan, Australia and India) by recognizing China’s growing aggressive attitude in the Indo-Pacific region, which was also very popular among ordinary Indians. It was also told at every forum that it would not be possible to balance power in the Indo-Pacific region without India. He was the first to recognize the need for strategic relations between India and Japan and made arrangements to strengthen it as long as he remained in the Prime Minister’s post. No wonder that only a few months ago, the Indian government had announced to give him the civilian honor Padma Vibhushan, who played a key role in the formation of the Quad, seeing the attitude of China, the country’s second largest. In a statement issued by the Government of India, it has been said that the Government of India and its people are deeply saddened by the sudden death of former Prime Minister of Japan, Shinzo Abe. We extend our deepest condolences to the people of Japan and to the family members of Abby. He was a visionary politician, who always worked for the welfare of humanity. In August 2007, AB gave his famous speech on the confluence of two seas in the Indian Parliament.

In this, the bilateral relationship between India and Japan was presented as the most likely relationship between any two countries. He has been at the forefront of bringing India and Japan together to make the Indo-Pacific region a free, open and equal opportunity for all. He also made a major contribution to making Japan’s relationship with India a special strategic and global partner. The grief of the loss of a dear friend is being felt across India today. The whole country is mourning.