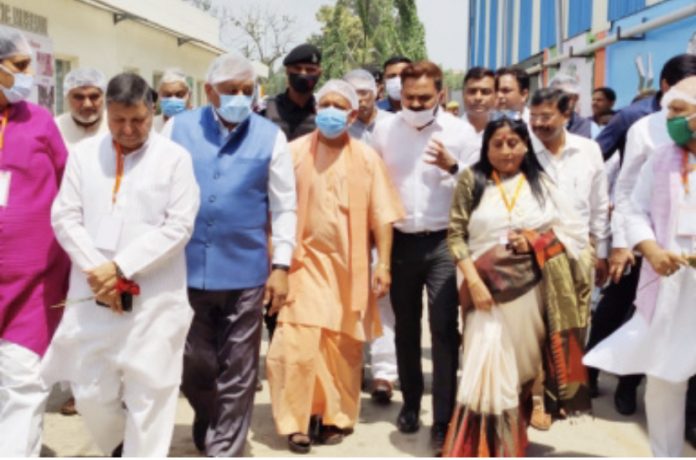 Ghaziabad: Several schemes of the Ghaziabad city were reviewed by Chief Minister Yogi Adityanath on Saturday here . In which many important schemes of Ghaziabad Municipal Corporation were also inspected.
The CM of U.P. Yogi reached Garbage Factory, Plastic Tourism and Reggie Bal Gopal Yojana located at Sand Mandi to inspect the site and to know how Ghaziabad Municipal Corporation is working in the interest of the city.The Municipal Commissioner Mahendra Singh Tanwar told CM about the working style of the schemes.

Under the leadership of Mayor Asha Sharma and Municipal Commissioner, where the city is being made garbage free and items like plastic are being recycled and used and most importantly the Bal Gopal scheme for the children of rag pickers was appreciated by CM. Toffee chocolates were distributed by the Chief Minister himself, encouraging the children studying there by his hands.

The Chief Minister directed to officers to expand plastic tourism and to take forward the plans of the corporation, as well as on the request of the Mayor, 10 vacuum sucker machines were also inaugurated by which work would be done in the commercial areas, which would help in removing the waste. These vacuum suckers machine will act as a lift from the road, increased the responsibility of the officers to make Ghaziabad as a model and encouraged for better results by working hard.