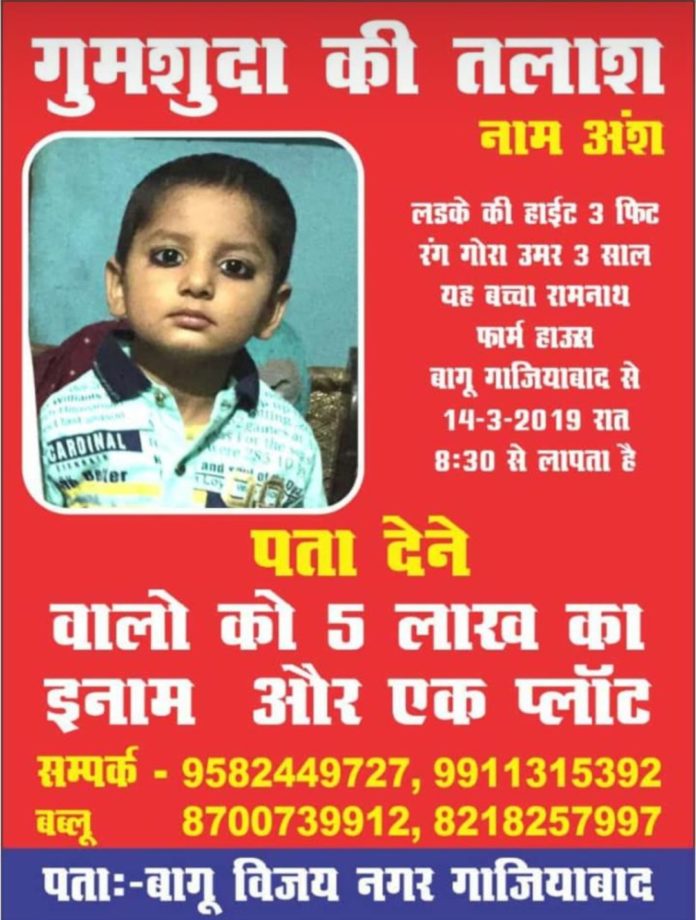 Ghaziabad: Ghaziabad Police is still unable to trace 2 year old  child who had gone missing from a marriage  party at a farm house in Bagu, under police station Vijay Nagar, in a misterious condition, even after 48 hours of misssing.

However after lodging missing complaint police has started investigating the matter from all angles including kidnapping for ransom.

Bablu’s son a resident of Sidharth Vihar near Bagu under Vijay Nagar Police Station, is missing since Thursday when he along with his parents went to attend a wedding party at Bagu from a farm house. When Bablu came out of marrige home for coming back to his house,  his two years old son namely Anshu  was missing.  He tried to search him in the entire campus of the marriage home but he couldnot find his son there and his all efforts gone futile to search his two year son. Lastly he was fully exhausted he informed to police the on dial 100. Police received complaint of missing child and has lodged an FIR of missing report and started investigating the case.

While talking to A News Of India  Shyamveer Singh SO Vijay Nagar informed, ” we have lodged a complaint regarding missing of the child of about 2 years old and has started investigation this case.”

On the ther hand parents of missing child has also annouced a reward of Rs 5 lakh and a plot whosoever inform about the child location and subsequently child is found. This case may be if kidnapping for ransom and of personal enmity. Police is investigating the case from all angles.

Child Found After 5 Days Mysteriously; Police Still Clueless About Reason Of His Disappearance