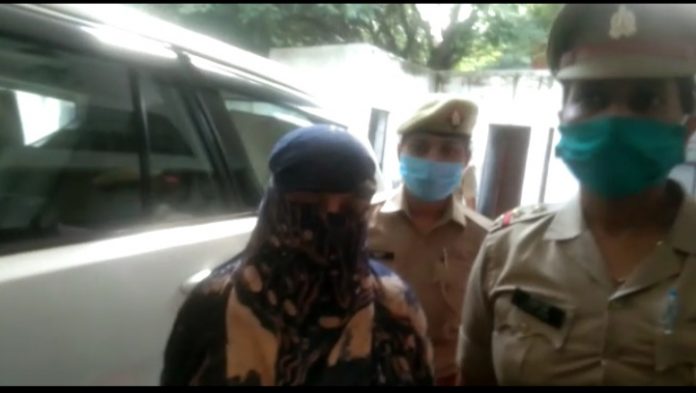 This is the Kalyugi mother standing in the grip of the police, who made a big game of kidnapping her five-year-old child Dhruv, in fact the incident came to light on August 7 when the abduction of Gaurav’s son resident across the line was stirred up in the evening.  There was a conspiracy, with which the police department was hesitant to say anything, he also demanded the media not to reveal the matter while citing the life of the child, but due to police pressure the child was recovered from Ghaziabad.  Was
But Moradabad SSP Prabhakar Chaudhary exposed the face of a Kalyugi mother as she presented the child’s mother and her boyfriend Ashfaq in front of the media, who himself confessed that he had been identified with Ashfaq on social media’s face book, those logos  Had asked for a ransom of three million, so that those people would go to Telangana to open a gym and get married and settle down,
According to SSP Prabhakar Chaudhary, the accused Ashfaq is originally from Telangana, and he was constantly in touch with the woman, and had taken the same vehicle to Ghaziabad with Dhruv in the kidnapping case, the police took all his video footage  Has disclosed it on the basis