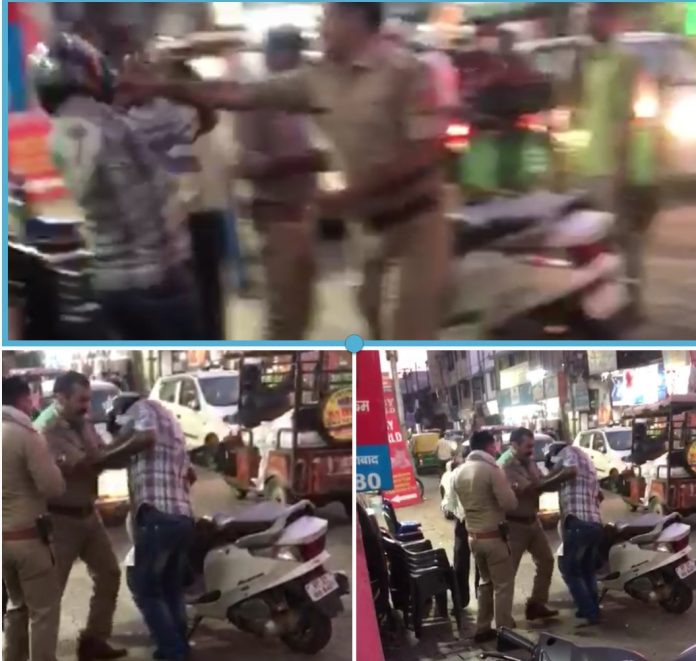 Moradabad: A video of Moradabad Police goes viral on social media which exposed Moradabad police atrocities on two wheeler riders. The video is of two days back recorded at Miradabad’s Court Road in which police personnel are seeing clicking photographs of two wheelers parked near road to challan the vehicle.

Police personnel also started beating the person even after the request of two wheeler rider and taking law in their own hand by the police personnel.

After the liberty granted by Yogi government to the UP police in order to control crime the high handedness of police personnel are on a peak now a days. it is not a surprise now, as even one of the UP’s MLA was seen beaten up and his cloth were torned by an ASI in Aligarh which had gone viral in social media. Thereafter a policy in this regard made by the present state government in UP that no MLA will visit police station and or will also not interfere in the day to day working of police had openly given an extra powers to the UP police which is an outcome and resulting of this type of cases has now started seeing in UP.  As of now UP police feels that they are above all and no one will stop them taking law in their own hands. Now it is high time such police personnel.must be punished and sent to home permanently after being terminated from the service of UP Police.

The matter not only ended here, the bike owner was compelled to touch the feet of both the police personnel and was asked  to forgiveness only then he was pardoned and could leave the place. WhatsApp group in Moradabad had quickly exposed the bullying of the UP police.

In this video, two policemen are imprisoned with a helmet wearing a bang, first a constable is seen confronting the two-wheeler rider, and thereafter, the police officer started abusing the person and also started assaulting him.