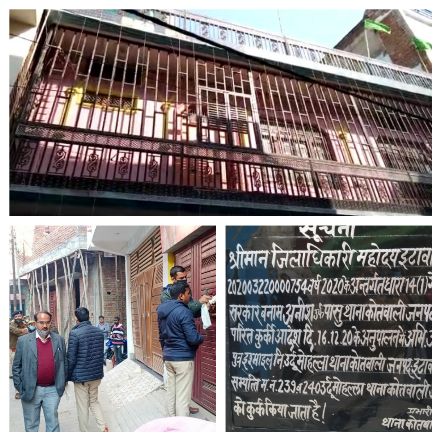 Etawah: A big action of Etawah police was seen in which police seized worth around 6 Cr. rupees property of famous land mafiyas in Etawah.
The order of which was issued by the District Magistrate Etawah on 16.12.2020 to seize the property of the said accused and the accused is also the wanted accused in another case for whose arrest the former senior Superintendent of Police Etawah had earlier declared the reward of 25000 rupees. In order to comply with the order of District Etawah Etawah today, on 21.12.2020, the property of the offender was pasted by the District Magistrate Nagar, Tehsildar Sadar and Inspector-in-Charge Inspector Kotwali and by publicizing the proceedings of the immovable property (seizure) of the offender.  The board was duly installed.  The said confiscated property was illegally acquired by the offender.

The accused Anees alias Pashu is a vicious criminal of the famous land mafia gang of the state, against whom 45 charges have been registered in different police stations.  In many of the cases, the accused has been sentenced by the Hon’ble Court but due to certain reasons, the files of the said orders have also been stolen from the District Court, in respect of which investigation is being done.
According to Aakash Tomer, SSP Etawah,”. Anees alias Pashu was convicted twice in 307 & 302 cases and awarded 4 years term  and life imprisonment respectively. But, both files were stolen from district court premises with collusion/negligence of lower court officials and hence did not get any punishment despite conviction.